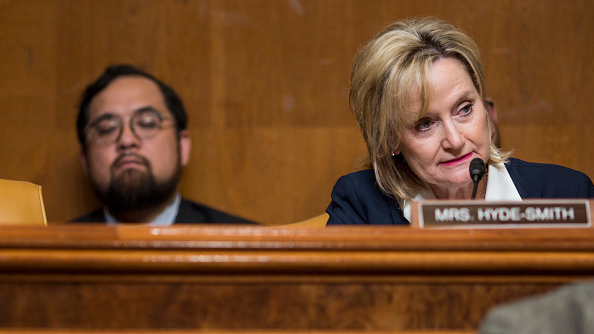 Zach Gibson/Getty Images(WASHINGTON) — Less than a week into Mississippi's Senate special election election runoff, GOP Sen. Cindy Hyde-Smith is facing criticism from her African-American opponent and from civil rights groups over a comment she made about "a public hanging" in the days leading into Election Day.

In a video posted by the publisher of the Bayou Brief, a Louisiana blog, Hyde-Smith, who is white, embraced a supporter after he praised her and said before a cheering crowd, "If he invited me to a public hanging, I'd be on the front row."
Hyde-Smith is now coming under fire from her Democratic challenger in the upcoming Nov. 27 runoff, Mike Espy, and the greater African-American community for evoking language reminiscent of lynchings that scar Mississippi's history.
The publisher of the Bayou Brief, who identified the Hyde-Smyth supporter as Colin Hutchinson, a cattle rancher, said the video was from a Nov. 2 event in Tupelo, in the northeastern corner of the state. The video has over 3 million views on Twitter.
Hyde-Smith sought to clarify her remarks in a statement issued Sunday.
"In a comment on Nov. 2, I referred to accepting an invitation to a speaking engagement," she said in the statement. "In referencing the one who invited me, I used an exaggerated expression of regard, and any attempt to turn this into a negative connotation is ridiculous."
During a speaking engagement in Jackson on Monday, Hyde-Smith repeatedly refused to answer reporters' questions about the comment, according to ABC News' affiliate WAPT.
Espy, an African-American from Yazoo City, was swift in his reproach of her comments, calling them "harmful" and "hurtful to millions of Mississippians" on CNN's New Day Monday.
"Those comments we heard that were published yesterday are very disappointing," he said. "They are hurtful and they are harmful. They are hurtful to millions of Mississippians who are people of goodwill and they're harmful because they tend to reinforce the stereotypes that held back our state for so long and that have cost us jobs and harmed our economy."
"This is 2018," he added. "We're going here in Mississippi into the third decade of the 21st century and we just should not have this. We need leaders that would try to unite us and not divide us."
His latest response comes a day after Espy condemned her remark in a statement: "Cindy Hyde-Smith's comments are reprehensible. They have no place in our political discourse, in Mississippi, or our country. We need leaders, not dividers, and her words show that she lacks the understanding and judgment to represent the people of our state."
Espy, a former Clinton cabinet secretary, would be the first African-American senator from Mississippi since the Reconstruction Era if elected. On Nov. 6, he finished in second place behind Hyde-Smith by netting 40.6 percent of the vote to Hyde-Smith's 41.4 percent.
Her remarks also drew a rebuke from the president of the NAACP, who called her comments "sick" and "tone deaf."
"Hyde-Smith’s decision to joke about 'hanging,' in a state known for its violent and terroristic history toward African Americans is sick," Derrick Johnson said in a statement Sunday.
He later wrote on Twitter that her "response is tone deaf and demonstrates disregard of MS racial history," adding, "We've seen this from Rob DeSantis & others this election season & denounce such mean spirited behavior," referring to the Republican gubernatorial candidate in Florida Ron DeSantis.
Her campaign did not immediately respond to ABC News' request for further comment.
Hyde-Smith, who was appointed to the open Senate seat by Republican Gov. Phil Bryant after former Sen. Thad Cochran resigned due to health concerns, shared the podium at the Monday event with Bryant as he reinforced his support for his pick, telling the audience, "All of us in public life have said things on occasion that we could have phrased better."
"I know this woman and I know her heart," he added. "I knew her when I appointed her. I know it now. She meant no offense by that statement. There was nothing in her heart of ill-will."
Hyde-Smith has a long history in Mississippi politics, previously serving as the state's Agriculture Commissioner from 2011 until her appointment to the Senate, as well as formerly serving as a state senator for 12 years beginning in 1999 when she was elected as a Democrat. She switched to the Republican Party in 2010, and even scored President Donald Trump's endorsement earlier this year during the special election's "jungle primary."
Before Nov. 6, multiple candidates from both parties competed in a four-way race to secure a majority of the vote to win the seat. With so many candidates in the field, including conservative state Sen. Chris McDaniel and Democrat Tobey Bartee, none of the contenders garnered 50 percent of the vote on Election Day, sending the race into a runoff on Nov. 27 between Hyde-Smith and Espy.
The deep red state voted for Trump by nearly 20 points in 2016, but also faces a complicated and difficult past with racism. Between the years of 1882 and 1968, Mississippi had the highest number of lynchings in the entire country with 581, according to the NAACP, including the lynching of Emmett Till.
The Magnolia state is also currently home to one of the largest African-American populations in the U.S., which stands at 38 percent, according to the U.S. Census Bureau.
Race has not been a central issue in this contest, but often on the trail, Espy invoked the struggle of fellow African-Americans across the state in addressing Mississippi's history with racism.
"Think about Medgar Evers," he told a crowd of supporters in Biloxi last month. "Think about Vernon Dahmer. Think about all of those who were sacrificed so we could get here … and now let me become an incredibly viable candidate for the United States Senate from the state of Mississippi."