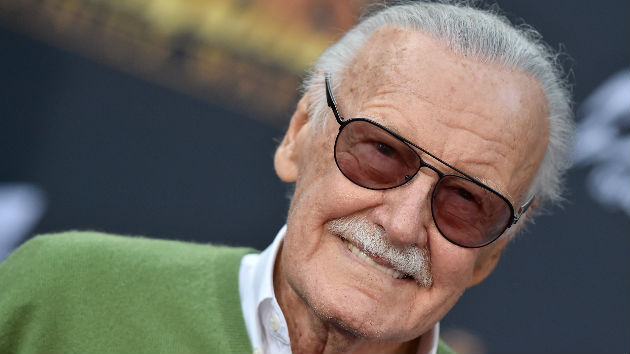 “Stan Lee was as extraordinary as the characters he created," said Disney Chairman and CEO Bob Iger in a statement. "A super hero in his own right to Marvel fans around the world, Stan had the power to inspire, to entertain, and to connect. The scale of his imagination was only exceeded by the size of his heart.”

Marvel Studios head Kevin Feige said of Lee: "No one has had more of an impact on my career and everything we do at Marvel Studios than Stan Lee. Stan leaves an extraordinary legacy that will outlive us all. Our thoughts are with his daughter, his family, and his millions of fans. #ThankYouStan #Excelsior!"

Considered one of the founding fathers of comic books, few figures can rival Lee's impact on pop culture. Born Stanley Martin Lieber in New York City in 1928, Lee's beginnings in the world of comics were humble: He refilled ink pots and fetched sandwiches for artists at the comics division of publisher Martin Goodman's company, Timely. Lee landed the job through a family connection, and began rising up the ranks at the company that in the 1960s would become Marvel Comics.

His first official contribution to the comic universe was a small one: a six word-long text box in Captain America Comics No. 3, though his responsibilities grew. After a stint in the U.S. Army Signal Corps from 1942-1945, Lee returned to the comics business in New York, but by the late '50s reportedly became dissatisfied and entertained leaving the field. However, an opportunity to create a superhero team to compete with rival DC comics' Justice League led Lee and frequent collaborator, famed artist Jack Kirby, to come up with the Fantastic Four in 1961.

The success of that comic and its more naturalistic approach to its characters — these heroes weren't perfect — led to the team creating The Incredible Hulk and Thor in 1962, and Iron Man and The X-Men in 1963. Lee, along with another legendary collaborator, Steve Ditko, also created another enduring hero, Spider-Man, in 1962.

Lee's fans spanned all walks of life: President Ronald Reagan had said Spider-Man's adventures got him into the habit of reading every day, while Spidey was reportedly a childhood favorite of President Barack Obama's as well. President George W. Bush honored Lee in 2008 with the National Medal of the Arts, and Lee received a star on the Hollywood Walk of Fame in 2011.

Lee's popularity led to numerous cameo appearances in the Marvel movies during their recent resurgence, from 2003's Daredevil to The Avengers and most every Marvel film since. He also appeared as himself in TV shows like The Big Bang Theory, and in movies like 1995's Mallrats and the 2011 documentary Comic-Con Episode IV: A Fan's Hope.

In 2012, Lee, then just short of 90 years old, had a pacemaker installed, joking at the time in a statement to fans he did so to be more like Iron Man's alter-ego, Tony Stark, who required an energy device implanted in his chest to stay alive. Lee said the real-life gadget would ensure, "that I’ll be able to lead thee for another 90 years." Author Bonnie Burton, who in the Geek DIY series Stan Lee's World of Heroes YouTube channel agreed, telling ABC News of Lee, "I always thought of him as the Hugh Hefner of comics. Ladies just flock to him! He's a blast to be on panels with — he's got more pep at 90 than most geek guys 1/3 of his age!"