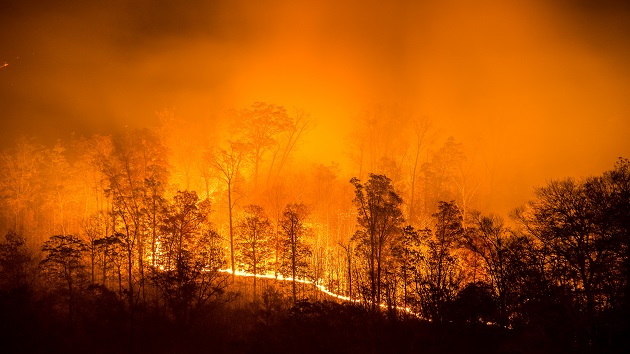 iStock/Thinkstock(PARADISE, Calif.) — When the deadly Camp Fire started to close in on Feather River Hospital in the Northern California town of Paradise, nurses were forced to evacuate their critically sick patients without warning.
"We got these patients in wheelchairs … we were pulling tubes out," nurse Nichole Jolly told ABC News. Patients and staff made their exit within 20 minutes.
That's when Jolly's own harrowing journey to safety on Thursday started.
She was in the hospital parking lot as the fire rushed toward her.
"I called my husband and I just said, 'I don't think I'm gonna make it out of this, it's coming in too fast, I don't even know where to go,'" Jolly recalled.
She started driving but "the fire was blowing in so fast."
"There was sparks and flames hitting the side of my car," she said. "My car started to fill up with smoke."
Another driver hit her car from behind, pushing her off the road. The car started filling up with smoke.
"I knew I was gonna die if I stayed in my car," she said, so she jumped out and ran to a friend's nearby truck.
She banged on the truck door but the windows were pitch black inside.
At that point Jolly's own car was completely engulfed in flames. She ran up a hill and got into the next car she found. Inside was a doctor from the hospital.
The back of the Jolly's pants were on fire, she recalled, and as she sat down she burned a hole in the doctor's seat.
"She was praying with me and she's like, 'I don't think we're gonna make it,'" Jolly said. "I said, 'Don't think that way, we're gonna make it.'"
The doctor's car started to fill with smoke so Jolly said she got out and started running up the hill.
The sky was pitch black, Jolly said, and the air burned her lungs.
"I thought I was gonna die right there," she recalled. "There was no oxygen."
Then out of the darkness, she said, a fire truck appeared.
Two firemen extinguished her pants, put a fire blanket over her and lifted her into the truck, she said.
Jolly managed to survive with only very minor blisters to her legs.
At least 29 people have been killed in the Camp Fire, which ignited on Thursday and nearly wiped out the town of Paradise.
Though Jolly's own home was destroyed in the blaze, "it can all be replaced," she said.
"I'm alive and I thought I was gonna die multiple times, so, it's just stuff," she said. "My life, my kids' life, my mom's life, my husband, that can't be replaced."