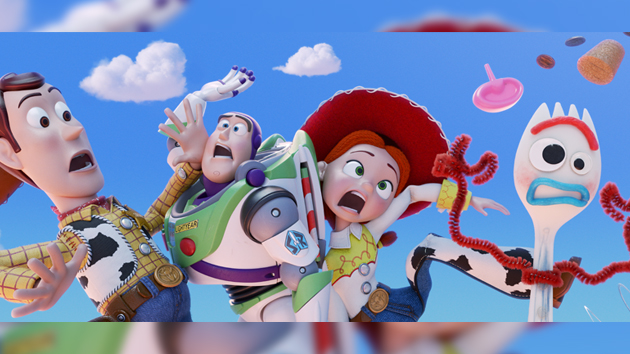 Disney/Pixar(NEW YORK) — It's been over six years since Toy Story 3 was released. It's about time we got an update on what Woody and Buzz Lightyear have been up to since.

Disney/Pixar just dropped the first look at Toy Story 4. Set to the sunny 1967 Judy Collins song "Both Sides Now," the roughly minute-and-a-half teaser shows Woody, Buzz, Jesse, Mr. and Mrs. Potato Head, Hamm, Rex and all of the other familiar toy characters from the first three movies, all holding hands as they smile and skip in a circle. That is, until we see an unfamiliar toy: a plastic spork, with pipe-cleaner arms and legs made of popsicle sticks.

"I don't belong here!" the spork cries out, then freaks out and breaks the circle, causing a massive toy pile-up as Woody tries to keep everyone calm. Whether or not Mr. Spork is a new character, we'll have to wait and see

2010's Toy Story 3, in which the human boy Andy grows up, gives away his beloved toys and heads off to college, was intended to be the final Toy Story film. The four years later, Pixar announced they'd make yet another sequel in response to fan demand. No doubt the box office also had more than a little to do with that decision: Toy Story 3 grossed over a billion dollars worldwide. Since Toy Story's 1995 debut, all three films in the animated franchise — including their 3D versions — have taken in over $883 million domestically and more than $1.9 billion globally, not adjusted for inflation.

Disney/Pixar's Toy Story 4 — with Tom Hanks, Tim Allen and the rest of the voice cast all reprising their roles — is scheduled for a June 21, 2019 release. Disney is the parent company of ABC News.