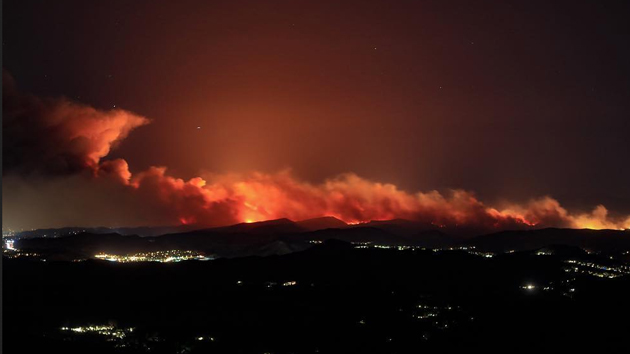 Myhealthguy/Instagram(LOS ANGELES) — Fueled by blustery winds and parched vegetation, two massive fires burning in California both grew overnight, leaving thousands of exhausted firefighter battling to stretch containment lines around the raging blazes that have killed at least 31 people and destroyed thousands of homes.
Adding to the turmoil were two new fires that broke out within five minutes of each other Monday morning near the massive Woolsey Fire burning in Los Angeles and Ventura counties.
Chief Mark Lorenzen of the Ventura County Fire Department said the first blaze started at 10 a.m. near the city of Thousand Oaks, quickly spread to 75 acres and was threatening homes. The second fire ignited about five minutes later in the Rocky Peak area near a densely populated area of Semi Valley on the Los Angles-Ventura County line. It grew to 105 acres and prompted the closure of Highway 118 in both directions for more than an hour, but the forward progress of the fire had been stopped by 2 p.m. PT.
Fire crews rapidly raced to both fires, battling them from the ground and air with helicopters. Firefighters were able to control the blazes and stop them from spreading to nearby populated areas, officials said.
"It just hits home that we are still in significant fire weather and the existing fire is not our only concern," Lorenzen said.
Meanwhile, the Camp Fire ravaging Nothern California's Butte County, now the most destructive and deadliest fire in the state's history, grew by 4,000 acres between Sunday and Monday morning as firefighters struggled to get a handle on the flames spreading into rugged, hard-to-reach terrain in the Sierra foothills.
Two prison inmate firefighters were among three injured fighting the Camp Fire, a Cal Fire officials told ABC News.
The fire, which is just 25 percent contained, has now burned 113,000 acres and destroyed 6,713 homes and businesses, according to the California Department of Forestry and Fire Protection, also known as Cal Fire.
The blaze has killed 29 people, tying it with the 1933 Griffith Park Fire in Los Angeles as the state's deadliest wildland inferno.
The California wildfires, as shown in the map below, have burned more than 209,000 acres across the state.
The Woolsey Fire, one of two blazes wreaking havoc in Southern California, grew to 91,572 acres on Monday. That's up 6,072 acres from Sunday, as it hopscotched through Los Angeles and Ventura counties, leveling homes in the celebrity enclaves of Malibu, West Lake Village, and Calabasas.
The number of structures destroyed, which includes homes, grew to 370 on Monday, up for 177 on Sunday, according to Cal Fire.
The Woolsey Fire, which killed two people in Malibu, was 20 percent contained on Monday, officials said.
Neil Young loses home
Singer Neil Young, 73, confirmed Sunday that his Malibu home was among those destroyed in the fire.
"We are up against something bigger than we have ever seen. It's too big for some to see at all," Young wrote on the Neil Young Archives page on Facebook. "Firefighters have never seen anything like this in their lives. I have heard that said countless times in the past two days, and I have lost my home before to a California fire, now another."
The monstrous fires were threatening to destroy up to 57,000 more homes in Southern California and another 15,500 in Northern California as blustery winds are expected to deal firefighters a menacing challenge throughout the state over the next two days, Cal Fire officials said.
Officials remained concerned the death toll could rise as search and rescue crews reach areas previously unreachable because of fire danger. There were more than 100 people missing in the Butte County fire zones, though officials were working to track them down.
At least 70 people reported missing were located on Saturday and are now safe, officials said.
The Butte County Sheriff's Office has activated a call center for the public to provide and receive information about those thought to be missing.
The bodies of most of those who perished were found in Paradise, the Sierra foothills community that was almost completely destroyed by the Camp Fire.
149,000 evacuated
More than 149,000 people throughout the Golden State have evacuated as a result of the fires, outgoing California Gov. Jerry Brown told reporters Sunday afternoon.
The threats from the Camp Fire and the Woolsey Fire aren't expected to diminish anytime soon, as gusty weather ramped back up Sunday throughout the state. Red flag warnings signaling extreme fire danger have been issued from California's border with Oregon to its border with Mexico.
Batallion Chief Lucas Spellman said Monday on ABC's "Good Morning America" that fires were being fueled by an abundance of vegetation that grew during a spike in precipitation last year only to wither during a new dry spell that has hit the state.
"So, it's just a recipe for destruction," Spellman said.
Wind gusts could reach 50 mph across the eastern foothills and western slopes of the northern Sierra Nevada mountain range through today, as well as parts of the Sacramento Valley.

Harrowing escape
Nichole Jolly, a nurse at Feather River Hospital in Paradise, said she was nearly killed twice Thursday by the Camp Fire after helping to evacuate critically sick patients.
"I called my husband and I just said, 'I don't think I'm gonna make it out of this. It's coming in too fast, I don't even know where to go,'" Jolly told ABC News.
She said she tried to drive out of the harm's way only to have her car fill up with smoke and get rear-ended by another panicked driver.
"I knew I was gonna die if I stayed in my car," she said, so she jumped out and ran.
She said her pants were on fire by the time she was rescued by two firefighters.
"Everybody I know lost everything.
Paradise resident Brad Weldon told ABC News that his home was one of four still standing on a mile-and-a-half stretch in his neighborhood.
Weldon woke up Thursday morning to fire reports in Pulga — about a 30-mile drive east of Paradise — but stayed at his home with his 90-year-old mother, Norma Weldon, who is blind and refused to leave.
Once Weldon noticed that the fire was coming toward his home with 60 mph winds, he witnessed a firenado change the course of the blaze.
"And a fire tornado, like a big firestorm, started right up there, and it kind of turned the fire away from us," he said. "I believe that was the angels."
When asked what was left of the town of Paradise, Weldon replied, "Nothing."
"It's gone," he said, holding back tears. "Everybody I know lost everything. It's real sad."
While firefighters struggled to get a handle on the Woolsey Fire, another blaze burning in the Southern California, the Hill Fire, was 75 percent contained Monday after it consumed 4,531 acres in Ventura County near Thousand Oaks, where a gunman killed 12 people Wednesday night at a country bar before taking his own life.
The infamous Santa Ana wind in Southern California began kicking up again on Sunday with gusts of up to 40 mph hitting the fire zones, officials said. The winds are not expected to calm down until Tuesday.
Two people were found dead in Malibu from the Woolsey Fire, officials from Cal Fire said.
Detectives believe that the victims, found in a vehicle off the Mulholland Highway, were killed after the driver became disoriented while evacuating and the car was overcome by fire, Los Angeles County Sheriff's Department Cmdr. Scott Gage said in a press conference Sunday afternoon.
More than 3,200 firefighters are battling the Woolsey Fire, while another 4,500 are fighting the Camp Fire. Firefighters are also tending to at least another 12 smaller fires burning throughout the state.
"We need to make sure that all citizens are diligent to making sure that they do nothing to start a new fire," Chief Scott Jalbert of Cal Fire said at a news conference Sunday.
Burning ice plant
Lorenzen implored people to leave evacuation zones. He said the fire was burning everything in its path, including ice plant.
"Ice plant is not supposed to burn," Lorenzen said Sunday. "So my message to the community today is maybe 10 to 20 years ago you stayed in your homes when there was a fire and you were able to protect them. Things are not the way they were 10 years ago. The rate of spread is exponentially more than what it used to be."
The governor-elect of California, Gavin Newsom, has issued an emergency proclamation for Butte County due to the Camp Fire.
On Sunday, Gov. Brown requested President Trump issue a Major Disaster Declaration to bolster the ongoing emergency response and aid residents in their recovery from devastating fires throughout the state.
"We have the best firefighters and first responders in the country working in some of the most difficult conditions imaginable," Brown said in a statement Sunday. "We're putting everything we've got into the fight against these fires and this request ensures communities on the front lines get additional federal aid. To those who have lost friends and family members, homes and businesses, know that the entire state is with you. As Californians, we are strong and resilient, and together we will recover."
Late on Friday, President Donald Trump declared a state of emergency for California, freeing up federal resources to supplement local response efforts. The declaration allows the U.S. Department of Homeland Security and the Federal Emergency Management Agency to coordinate disaster relief efforts to help alleviate the hardship and suffering caused by the emergency on the local population, provide support for emergency measures and free up federal resources.
But on Saturday morning, Trump threatened to pull federal funding for California wildfires if the state didn't "remedy" its poor "forest management."
"Our focus is on the Californians impacted by these fires and the first responders and firefighters working around the clock to save lives and property — not on the president’s inane and uninformed tweets," Brown's press secretary, Evan Westrup, told ABC News on Sunday.
Brian Rice, president of California Professional Firefighters, called Trump's threat to slash funds for battling California wildfires "ill-informed, ill-timed, demeaning to those who are suffering as well as the men and women on the front lines."
Rice said Trump's assertion that California's forest management policies are to blame for the catastrophic wildfires is "dangerously wrong."
"Wildfires are sparked and spread not only in forested areas but in populated areas and open fields fueled by parched vegetation, high winds, low humidity and geography," Rice said.

Four dead after small plane crashes in California
Dave Chappelle, Kevin Hart, John Mulaney and more headline the massive Netflix Is a Joke lineup in 2022
Yo, Adrian! We did it! ‘Rocky’ memorabilia knocks ’em out at auction
Check out the brand-new teaser to ‘Spider-Man: Across the Spider-Verse: Part 1’
Omicron live updates: Minnesota man who became one of the first cases in US speaks out
Member of ‘Jena Six’ speaks out on race and the justice system 15 years later