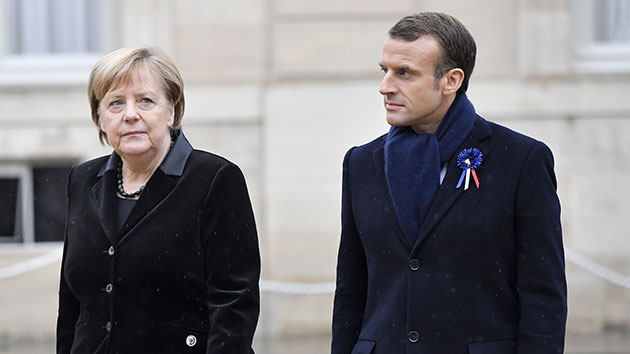 Aurelien Meunier/Getty Images(PARIS) — As Angela Merkel and Emmanuel Macron stood hand in hand at Compiegne just outside Paris, it was the first time German and French leaders had publicly gathered at the spot where the Armistice was agreed upon a century ago.
“United,” the single word in a tweet by President Macron to describe the relationship.
It was a moment intended for the solemn remembrance of the end of World War I, but as Europe’s two centrist leaders stood alone in the rain, it was a stark reminder that Macron and Merkel are not just representatives of the France-German alliance — the bedrock of European stability — but are personal allies in their struggles to defend liberalism against the rising political threats they face at home.
Last month, Merkel announced she would not seek another term as chancellor after heavy losses to populists in regional elections nearly brought her government to its knees.
Macron’s popularity has slumped dramatically, with Marine Le Pen’s remodeled National Front this month pulling ahead of his party in polls for the first time, according to reports.
In 2015, liberal Europe and its defining policy of open borders was put to the test at the height of the migrant crisis.
Merkel’s act of opening Germany’s borders to 1 million refugees sparked a strong reaction that helped propel the far-right Alternative for Germany into government in 2017.
The makeup of Europe’s political establishment is also undergoing a visible change.
Hungarian leader Viktor Orban espouses a doctrine of ethno-nationalism, arguing for securing borders to “keep Europe Christian.”
Italy’s populist deputy prime minister, Matteo Salvini, who called for a census on ethnicity, is the country’s most popular politician. He has a close relationship with Steve Bannon, the former White House chief strategist in President Trump's administration, and Russian President Vladimir Putin.
In Poland, the right-wing ruling Law and Justice party is led by Jaroslaw Kaczynski, who said migrants carry “all sorts of parasites and protozoa.”
The vice chancellor of Austria is Heinz-Christian Strache, who was detained in his youth during a torch-lit neo-Nazi rally — a moment of “stupidity” in his own words. Yet his Freedom Party, established in the 1950s, is accused of having Nazi roots.
The list of anti-liberal elected officials in Europe's parliaments is growing. And, on the streets across the continent, there are signs of a resurgence in the far-right.
The act of performing a Nazi salute is illegal in Germany, but protesters in Chemintz and Kothen were photographed openly making the sign and chanting the old Nazi slogan “Lugenpresse” — lying press — at riots sparked by the fatal stabbing of a German man, allegedly by immigrants from the Middle East.
Several hundred neo-Nazis held a rock festival in Saxony on Hitler’s birthday in April. And supporters of the extreme-right Golden Dawn party in Athens staged demonstrations against the building of a state-funded mosque.
Against the backdrop of movements previously on the fringe creeping toward the mainstream was the image of a united Merkel and Macron, seeming to symbolize the last vestiges of a liberal Europe identity.
Still, the lessons of the past were prominently on display in Paris this weekend — namely the importance of international cooperation and the alliances underpinning the post-war order that, so far, have successfully overseen peace on the continent.
Copyright © 2018, ABC Radio. All rights reserved.