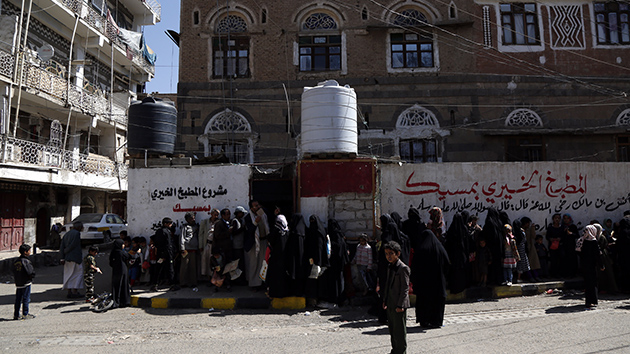 Mohammed Hamoud/Getty Images(NEW YORK) — The U.S. military will no longer provide midair refueling for the Saudi-led coalition's warplanes fighting in Yemen, Saudi state media and the Pentagon confirmed Friday.
The change came after growing pressure from Congress to end U.S. support for Saudi Arabia, the United Arab Emirates and Yemen's government in their battle with rebels, known as the Houthis, that has stretched for nearly four years, killing at least 16,200 civilians and bringing 14 million people to the brink of famine.
While the U.S. is still aligned with the Saudis and Emiratis and providing support in other ways, the end of midair refueling removes a controversial and tangible measure of support for the coalition, especially in light of international criticism of its targeting civilians.
It also comes as the U.S. has joined a push for a cessation of hostilities in Yemen and diplomatic efforts by the United Nations Special Envoy Martin Griffiths to bring the warring parties to the table for talks by the month's end.
The decision was made because the coalition "has increased its capability to independently conduct inflight refueling," according to the state-run Saudi Press Agency, which said the U.S. was consulted first.
Defense Secretary James Mattis welcomed the decision in a statement Friday, adding that the U.S. will turn to working with the coalition "on building up legitimate Yemeni forces to defend the Yemeni people, secure their country's borders, and contribute to counter Al Qaeda and ISIS efforts in Yemen and the region."
The U.S. has been conducting a counter-terror campaign against both terror groups, one of the reasons it has long supported the Saudi and Emirati-led coalition. The other primary factor is that the Houthis are aligned with Iran, which the Trump administration has targeted as the source of unrest in the region.
"It's the Iranian leadership that continues to fuel the Houthis in a way that has engendered this civil war that has wreaked so much death and destruction inside of Yemen," Secretary of State Mike Pompeo told BBC Persian Wednesday.
The administration will still provide intelligence and reconnaissance to assist the Saudis and Emiratis, in addition to several arms deals with both countries.
But the decision to end midair refueling was widely welcomed by Congress, which has long called for this move.
Republican Sen. Todd Young of Indiana and Democratic Sen. Jeanne Shaheen of New Hampshire released a statement earlier on Friday calling on the administration to do just that, threatening further congressional action if the administration had not done so on its own.
To some members, the decision was belated and inadequate. Rep. Ro Khanna, D-Calif., called for Congress to pass legislation he has introduced to codify an end to U.S. involvement in the conflict, which he sees as unlawful because it was never authorized by Congress.
"By finally ending refueling missions for Saudi bombers, the Trump administration is admitting our joint operation in Yemen has been a disaster. … Now that it's no longer a secret that the war in Yemen is a national security and humanitarian nightmare, we need to get all the way out," said Sen. Chris Murphy, D-Conn., in a similar statement.
The question is whether the U.S. ending support will be joined by increased diplomatic pressure on the Saudis and Emiratis to end the conflict.
There was growing doubt this week that will be the case after fighting throughout Yemen intensified just days after Mattis and Pompeo issued joint statements to support a new push for a ceasefire and negotiations. While the U.S. backs the coalition, it seemed to ignore the U.S. calls for peace, beginning an offensive to retake the key port of Hodeida, through which around 80 percent of Yemen's food and humanitarian goods enter the country.
This week, Yemeni government-aligned forces, backed by Saudi and Emirati air power, moved in on the city, even as Houthi rebels seized a hospital as a military outpost to fire on coalition forces — a sign of how both sides have behaved in this brutal war, conducted what the U.N. says amount to war crimes and put civilians in their crosshairs.
Despite the violence, the U.N. is still pushing to bring all sides around a negotiating table by the end of November. That goalpost seemed to fade out of sight, with the U.N. Secretary-General's deputy spokesperson saying Griffiths hoped to do so by year's end.
But a source told ABC News that things are still on track for an end-of-November meeting, with Griffiths and his team making progress to that end.
Griffiths's team denied any delays, telling ABC News in a statement, "There hasn't been a 'postponement.' Our work to re-launch the political process is proceeding as planned. … We are committed to convening the talks as soon as [logistical] arrangements are finalized."
A U.S. official declined to comment on any timeline, but told ABC News, "Our principal objective remains a resolution to the conflict, and we are focusing our energies in support of the U.N. Envoy's efforts to that end. We reiterate our calls for a cessation of hostilities and for all parties to come to the table to find a peaceful solution to the conflict."
One potential snag , aid groups warned, were reports that the U.S. is considering designating the Houthi rebels as a terrorist organization. The Washington Post reported Friday that the idea was under consideration by the Trump administration.
While the idea has been under discussion multiple times within the U.S. government since the Obama administration, a separate source told ABC News this is not expected to happen now. It's unclear how far along in that lengthy process, if at all, the idea currently is.
Experts warn that doing so would alienate the Houthis and sabotage the peace process — which the administration says it does not want to do. It could also complicate or endanger the work of aid groups who have to negotiate and work with the Houthis to administer services in territory that they control.