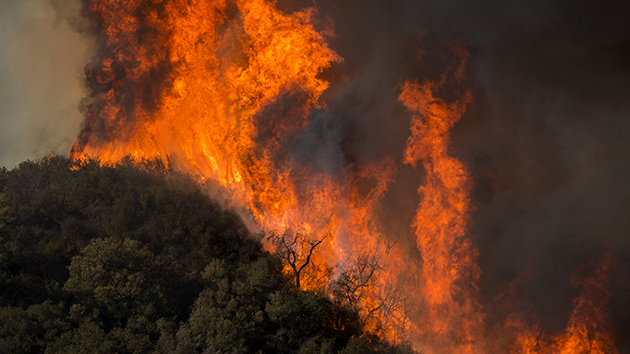 President Donald Trump woke up in Paris on Saturday in the mood to make threats toward California as it deals with deadly wildfires in Northern California and hundreds of smoldering homes in Southern California. In an angry tweet, the president threatened to pull federal funding for the state if nothing is done to "remedy" the situation.

Trump is in Paris to take part in a commemoration for the 100th anniversary of the end of World War I. But his mind was still on the disaster unfolding out west in the U.S.

Nine people have died in a spate of wildfires that began this week. All of the deaths were as a result of the Camp Fire in the area of Paradise, California, near Chico. Almost the entire city was decimated by flames early Friday.

"The president’s assertion that California’s forest management policies are to blame for catastrophic wildfire is dangerously wrong," California Professional Firefighters President Brian K. Rice said in a statement on Saturday.

"Wildfires are sparked and spread not only in forested areas but in populated areas and open fields fueled by parched vegetation, high winds, low humidity and geography," he continued in the statement. "Moreover, nearly 60 percent of California forests are under federal management, and another two-thirds under private control. It is the federal government that has chosen to divert resources away from forest management, not California."

"Natural disasters are not “red” or “blue” – they destroy regardless of party," Rice concluded. "Right now, families are in mourning, thousands have lost homes, and a quarter-million Americans have been forced to flee. At this desperate time, we would encourage the president to offer support in word and deed, instead of recrimination and blame."

On Saturday evening, Trump changed course, tweeting support for the firefighters, the homeowners and the tragic victims of the west coast wildfires.

"God bless them all," the president tweeted.

Trump has made similar claims in the past, and fire officials have pushed back.

In August he tweeted, "California wildfires are being magnified & made so much worse by the bad environmental laws which aren’t allowing massive amounts of readily available water to be properly utilized. It is being diverted into the Pacific Ocean. Must also tree clear to stop fire from spreading!"

"We have plenty of water to fight these fires," Deputy Cal Fire Chief Scott McLean said in a statement in August. Nonetheless, the Trump administration announced it would override the Endangered Species Act to provide extra water — not needed by the fire crews.

He also criticized California's handling of forest fires at an Oct. 17 Cabinet meeting. During an exchange with Secretary of Agriculture Sonny Perdue, Trump called California "a mess" and "disgraceful."

"I say to the governor, or whoever is going to be the governor, of California: You better get your act together," Trump said. "Because California, we're just not going to continue to pay the kind of money that we're paying because of fires that should never be to the extent [they are]."

Trump has long feuded with current California Gov. Jerry Brown, a Democrat, who is set to be replaced by fellow Trump antagonist Gavin Newsom. The Democrat was elected to the office last week. Newsom was previously married to former Fox News host Kimberly Guilfoyle, who now dates Donald Trump Jr.

"It's costing our country hundreds of billions of dollars because of incompetence in California," Trump said in that Cabinet meeting.

It's unclear where Trump was getting the figure of "hundreds of billions of dollars." Cal Fire's operating budget for 2018-19 is $2.3 billion.

Fire Management Assistance Grants, authorized through the Federal Emergency Management Agency (FEMA), refund as much as 75 percent of firefighting costs for departments. The U.S. Department of Housing and Urban Development also provided $212 million to the state of California in 2017.

Trump's tweet ironically comes while he is in Paris, the namesake of the Paris Climate Agreement, under which nearly 200 countries agreed to curb greenhouse gas emissions in order to combat climate change. The agreement was signed by the U.S. during Barack Obama's administration, but Trump pulled the country out of the agreement in June 2017.

Michael Mann, an atmospheric science professor at Penn State University, told PBS' "NewsHour" in August that he believes climate change is contributing to the increased seriousness of wildfires.