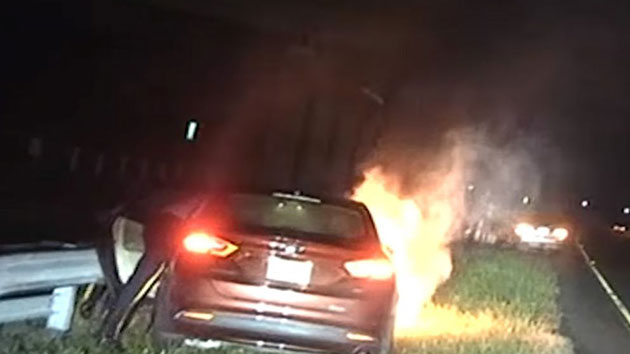 In video released by the New Jersey State Police on Thursday, State Troopers Thomas O'Connor and Christopher Warwick can be seen yelling at the man to get out of his Ford Fusion before realizing he was unconscious on State Highway 42 in Camden County, New Jersey, just east of Philadelphia.

When they arrived on the scene, they found the unconscious man pressing on the gas pedal of the car and smoke coming out of the front wheel well, State Police said in a statement on their Facebook page.

"Moments after their arrival, the front end of the vehicle became engulfed in flames," the statement said.

O'Connor told ABC News that he and his colleagues had been trained for these kinds of situations. He said that in that moment, they did not have time to think about anything else but saving the man's life.

"You just don't think," he said. "You just go in and you're focused on trying to save somebody's life."

Although the man was trapped in the car, O'Connor said that he and Warwick were eventually able to get his legs loose from underneath the steering wheel and pull him out of the driver's side window.

Even though the ordeal only lasted a few minutes, O'Connor said it felt like much longer.

"I guess at that current moment, it feels like you've been there for an hour. But in reality, it's pretty quick," he said.

The troopers dragged the man to safety where he regained consciousness, according to the statement. He did not suffer any injuries.

The two troopers happened to be in the area when the call about the burning car came in, they said.

Warwick said that there was a sense of pride in helping the man, but that fellow troopers would have done the same thing.

The video speaks for itself, Warwick said, adding, "I think it was a quick reaction. Fortunately, it had a positive outcome."