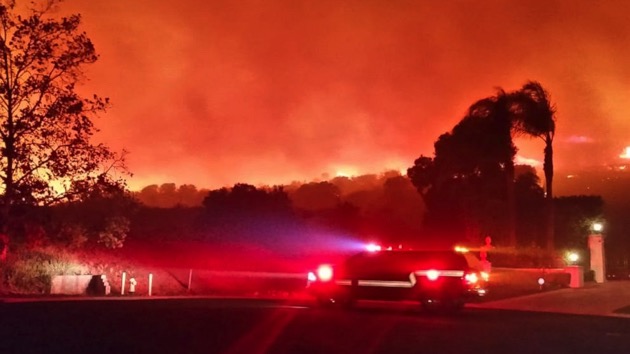 Ventura County Fire Department(THOUSAND OAKS, Calif.) — Two fast-moving wildfires that exploded in the hills of Southern California are forcing thousands of evacuations, including the entire city of Malibu and a sprawling naval base.

One of the blazes, the Woolsey Fire, grew to more than 10,000 acres overnight as it spread south from Simi Valley in Ventura County to Agoura Hills in Los Angeles County, where the flames jumped the 101 Freeway and continued burning toward the Malibu area. About 148,000 residents in Ventura and Los Angeles counties have evacuated or in process of evacuating, including a mandatory evacuation for all of Malibu, according to the the Ventura County Fire Department.

The freeway was closed in both directions near the Liberty Canyon Road exit due to "very active fire conditions," authorities said.

The Woolsey Fire was zero percent contained as of Friday morning, though hundreds of firefighters were working to quell the flames. So far, there have been no fire-related fatalities or severe injuries, according to the Ventura County Fire Department.

The inferno ignited Thursday afternoon in Simi Valley, northeast of Thousand Oaks, not far from where a mass shooting claimed at least 12 lives late Wednesday night.

Authorities have described the blaze as a very dangerous, wind-driven fire. Wind gusts could reach 70 mph and relative humidity could be as low as 2 percent in Southern California on Friday, creating the conditions for the fire to rapidly spread.

The second blaze, the Hill Fire, ignited around the same time Thursday in the Santa Rosa Valley area of Ventura County, northwest of Thousand Oaks, and has since grown to 6,100 acres. Several areas were under mandatory evacuation orders, including the Naval Base Ventura County's facility in Point Mugu, located near Oxnard, according to the Ventura County Fire Department.

The fire was zero percent contained as of Friday morning, authorities said the flames could spread all the way to Pacific Ocean.

Another brush fire broke in Griffith Park behind the Los Angeles Zoo on Friday morning. An estimate on the acreage of the new blaze was not immediately known, but the Los Angeles Zoo said its staff are "preparing some animals for evacuation and hosing down the most vulnerable hillside areas."

Meanwhile, the Camp Fire in Northern California laid waste to the city of Paradise overnight. Tens of thousands had fled the city, just east of Chico, where officials said thousands of buildings had been burnt to the ground.