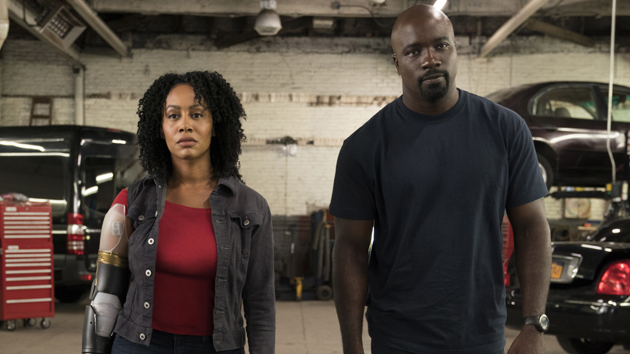 Simone Missick with Mike Colter in "Marvel's Luke Cage"; David Lee/Netflix(NEW YORK) — In the course of a week, Simone Missick's life as detective Misty Knight was turned upside down with the cancellation of two Marvel superhero series, Iron Fist and Luke Cage.

Now, less than a month after the cancellations, Missick is revealing to ABC Radio that she and Luke Cage showrunner Cheo Hodari Coker had already set big plans for her bionic arm-toting Harlem detective.

"I can most certainly say that Cheo and I sat down," Missick says. "We sat down after season two wrapped. He had come to New York to see me… and I was like, 'OK! This is what I need for Misty. I need for us to see her arm reborn…'"

As Simone explains, Misty's arm was "destroyed" at the end of Iron Fist season two. As a result, Coker had plans to bring her back with a brand new appendage, which would undoubtedly be even more powerful than the first.

However, Misty says that wasn't the only thing on the "docket." She also wanted fans to see her origins story.

"We knew Luke's origin story… in season one," she said. "Season two we got to see his father and get a little bit more of who he was as a man."

She continues, "We had gotten to see this beautiful story with Mariah, played by Alfre Woodard, and her daughter and how she came to be who she was… And so I was like, 'It's time for us to see some of Misty's backstory!'"

Missick also reveals that Coker had sent her the first five episodes of season three and had intentions to introduce new villains and bring back characters. Still, the actress says she doesn't know what the future holds for those characters, including her own.

"It's one of those things where, who knows how these characters will ever come back and if they will or if they won't," she says.

Simone Biles named one of the People of the Year, ‘White Men Can’t Jump’ remake, and more
‘The Bachelor’ season 26: Clayton Echard announced as new lead
AMC announces ‘Kevin Can F*** Himself’ will end after season 2
Denver still waiting for first snow of season, breaking record
Hurricane season ends with 21 named storms, using all the names for 2nd consecutive year
Rachel Brosnahan wants to “change the business” in season 4 teaser for ‘The Marvelous Mrs. Maisel’