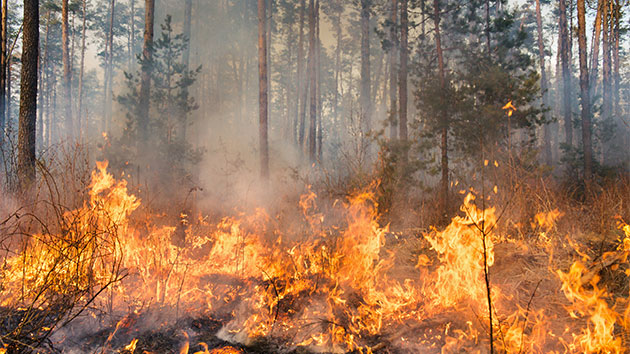 iStock/Thinkstock(NEW YORK) — At least nine people were killed when flames from a raging wildfire engulfed their vehicles, homes and neighborhoods in Northern California, authorities said.

Four of those victims were found dead in or near torched vehicles in the bucolic town of Paradise, which has been almost entirely decimated by the Camp Fire. Autopsies will be conducted to determine the circumstances of the deaths and to identify the individuals, but investigators believe their cars were "overcome" by the flames, according to a statement from the Butte County Sheriff's Office on Friday night.

Three more bodies were discovered outside of residences and a fourth inside a home where the wildfire was burning, the sheriff's office said.

Authorities have received reports of additional fatalities due to the blaze, which investigators are working to confirm. Rescuers had responded to at least 588 calls for people needing assistance as of Friday night, according to the sheriff's office.

"The task is difficult due to the fact that the fire is still active and there are many hazards in areas where fatalities have been reported," the sheriff's office said in the statement.

The Camp Fire ignited Thursday morning in Pulga, a tiny community in Butte County nestled in the Plumas National Forest, and strong winds fanned the flames overnight, sending thousands of residents fleeing for their lives.

The blaze raced southwest that night through the small community of Concow and then Paradise, which was largely destroyed, according to Scott McClean, public information officer of the California Department of Forestry and Fire Protection.

The fire was also burning to the northwest into Magalia and toward Stirling City.

By Saturday morning, the Camp Fire was burning an area of about 100,000 acres in Butte County and was 20 percent contained, according to the California Department of Forestry and Fire Protection. At least three of the 3,223 firefighters in the field have been treated for injuries.

Officials estimate that more than 6,700 structures in the affected area have already been destroyed, which would make the Camp Fire the most destructive blaze in California's modern history.

Some 52,000 people have been evacuated from their homes. Pulga, Concow, Magalia, Stirling City and the entire town of Paradise were among the areas that were under mandatory evacuation orders, according to the California Department of Forestry and Fire Protection.

No evacuation orders have been lifted.

The governor-elect of California, Gavin Newsom, on Thursday issued an emergency proclamation for Butte County due to the Camp Fire.

The fire threat isn't expected to alleviate anytime soon, as gusty weather ramps back up over the weekend. Red flag warnings and fire weather watches have been issued for parts of Northern California, including the areas surrounding Sacramento and San Jose.

Beginning Saturday night and continuing into Monday, wind gusts could reach 50 mph across the eastern foothills and western slopes of the northern Sierra Nevada mountain range, as well as part of the Sacramento Valley.

Despite varying wind speeds, the region will remain bone-dry over the coming days.

Late on Friday, President Donald Trump declared a state of emergency for California, freeing up federal resources to supplement local response efforts to combat three major wildfires blazing across the state. The declaration allows the U.S. Department of Homeland Security and the Federal Emergency Management Agency (FEMA) to coordinate disaster relief efforts to help alleviate the hardship and suffering caused by the emergency on the local population, provide support for emergency measures and free up federal resources.

But on Saturday morning, Trump threatened to pull federal funding for California wildfires if the state didn't "remedy" the situation.

One of the blazes jumped the 101 Freeway on Friday morning and continued burning toward Malibu, prompting officials to order the entire city to evacuate. The other fire could spread all the way to the Pacific Ocean, authorities said.