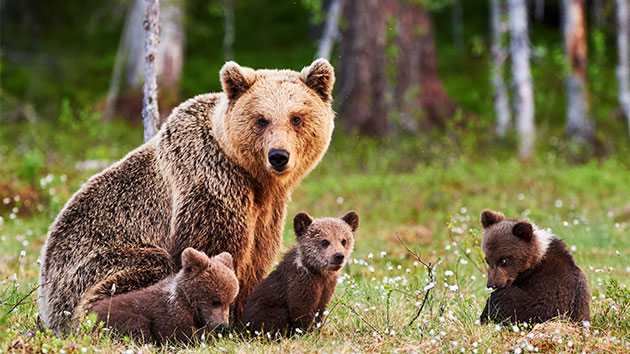 iStock/Thinkstock(NEW YORK) — We may not punch ballots on Election Day anymore, but for one 78-year-old man, he was punching something: a big black bear.

Sonny Pumphrey was cleaning up fall leaves in his driveway in White Oak, North Carolina, on Nov. 6 when he came face to face with a mother bear and her two cubs.

He said that the cubs ran away when he saw them, but that the mother stayed behind, leaving him with no choice but to confront her.

"I had nowhere to run. I could not go right and I couldn't go left," Pumphrey told ABC News. "I guess I just went with my natural instinct and just tried to protect myself."

Pumphrey said the bear immediately ran toward him to attack, and that his reaction was to punch her in the face.

"I had nothing in my hands, so… I just started slugging at the bear as hard as I could," he said.

Pumphrey said he was able to land a few hits, however, the bear eventually bit him and began shaking him like a "rag doll."

Pumphrey's wife, Betty Pumphrey, said that she heard the commotion from inside the house.

"I was scared to death that she was going to kill my husband," Betty Pumphrey said. "He was fighting for his life."

She said that she ran outside with her dog to try to scare the bear away.

"The door was open and… I saw the bear attacking him," Betty Pumphrey, 72, said. "I didn't hesitate, I just went through the door and screamed, and then with the little dog barking, we tried to, you know, get [the bear] away from him."

“I guess with all the commotion, it startled her and she turned and ran," she added.

With the bear gone, Betty Pumphrey called 911, and an ambulance took Sonny Pumphrey to the hospital, where he received rabies shots for his bitten and bruised hip.

Sonny Pumphrey said he was at home recovering on Friday.

He said that he was lucky to be alive after the ordeal and that from now, on he wouldn't be leaving home without his gun.

“I got lucky,” he said. “I am one lucky individual to be alive today.”