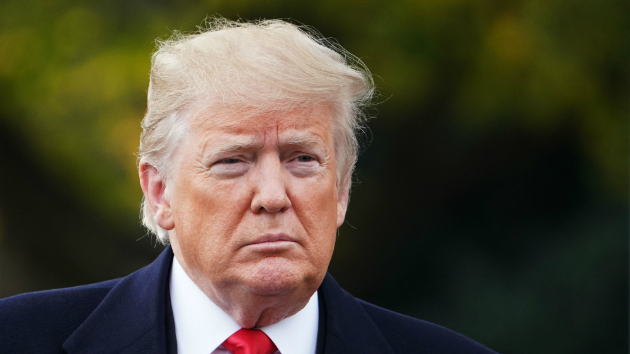 MANDEL NGAN/AFP/Getty Images(WASHINGTON) — President Donald Trump responded to a mass shooting at a Southern California music club, calling it "terrible" and saying he has been "fully briefed" on the incident.

At least 12 people were killed and 10 others injured when a gunman burst into the packed club in Thousand Oaks, California, a suburb of Los Angeles, tossing smoke grenades and firing dozens of rounds, witnesses and authorities said.

The lone suspect was also found dead inside the Borderline Bar and Grill that was hosting a college night on Wednesday night, police said. Authorities are working to determine his identity and motive.

I have been fully briefed on the terrible shooting in California. Law Enforcement and First Responders, together with the FBI, are on scene. 13 people, at this time, have been reported dead. Likewise, the shooter is dead, along with the first police officer to enter the bar….

The president added to his first tweet with a second one minutes later. He commended "great bravery shown by police" and said the first officer to enter was "shot numerous times."

….Great bravery shown by police. California Highway Patrol was on scene within 3 minutes, with first officer to enter shot numerous times. That Sheriff’s Sergeant died in the hospital. God bless all of the victims and families of the victims. Thank you to Law Enforcement.

The Ventura County Sheriff's Department named Sgt. Ron Helus, a 29-year veteran who was about to retire, among the dozen killed. Helus, survived by his wife and son, was looking to retire next year, the sheriff's office said.
The president does not yet have any events Thursday that are open to the press, but is scheduled to meet with Supreme Court justices in the morning.