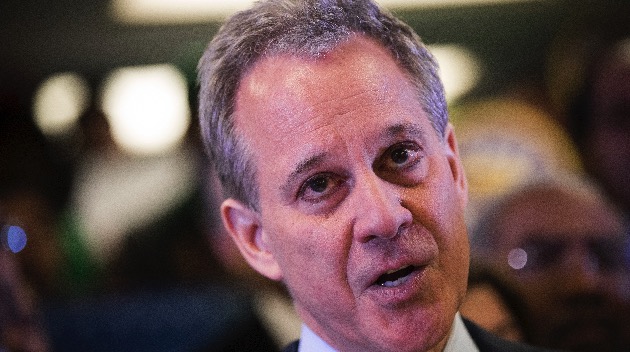 Drew Angerer/Getty Images(NEW YORK) — New York’s former Attorney General Eric Schneiderman will not face criminal charges following allegations from four women that he assaulted them – a string of accusations that led to his abrupt resignation in May, the prosecutor charged with investigating the incidents announced Thursday.
In statement in response to the announcement, Schneiderman, who spent time in a rehabilitation facility after resigning, said that he recognizes that “the decision not to prosecute does not mean I have done nothing wrong,” and reiterated what he has said before – that he takes “full responsibility for my conduct.”
Schneiderman resigned only hours after the New Yorker magazine published the claims, each of which came from women whom he had been romantically involved with at the time.
“Following an exhaustive review, evaluation of the facts, the law, and applicable statutes of limitations, I have concluded our investigation into the allegations of physical abuse allegedly committed by former New York State Attorney General Eric T. Schneiderman without criminal charges,” Nassau County District Attorney Madeline Singas wrote in a statement released this morning.
Singas stressed in her statement that she believed the women who made accusations against Schneiderman, citing “legal impediments” to successful prosecution as a reason for choosing not to file criminal charges.
I believe the women who shared their experiences with our investigation team, however legal impediments, including statutes of limitations, preclude criminal prosecution. Our investigation also highlighted deficiencies in New York law for which I have drafted remedial legislation.[1]Singas also stressed that she had relied on both a team of seasoned special victims’ investigators and prosecutors, and her own interviews with the women who cooperated with her investigation and their attorneys.
Additionally, she wrote in the statement, “Our team interviewed members of Mr. Schneiderman’s security detail, employees of the Office of the Attorney General, potential witnesses identified during the pendency of our investigation, and we followed-up on each call to the tip line we established for this matter.”
For his part, Schneiderman released a statement reiterating that, "I accept full responsibility for my conduct in my relationships with my accusers, and for the impact it had on them."
Schneiderman continued: "After spending time in a rehab facility, I am committed to a lifelong path of recovery and making amends to those I have harmed. I apologize for any and all pain that I have caused, and I apologize to the people of the State of New York for disappointing them after they put their trust in me.”
The investigation found no misconduct by Mr. Schneiderman’s staff in the Office of the Attorney General, according to Singas.
Copyright © 2018, ABC Radio. All rights reserved.