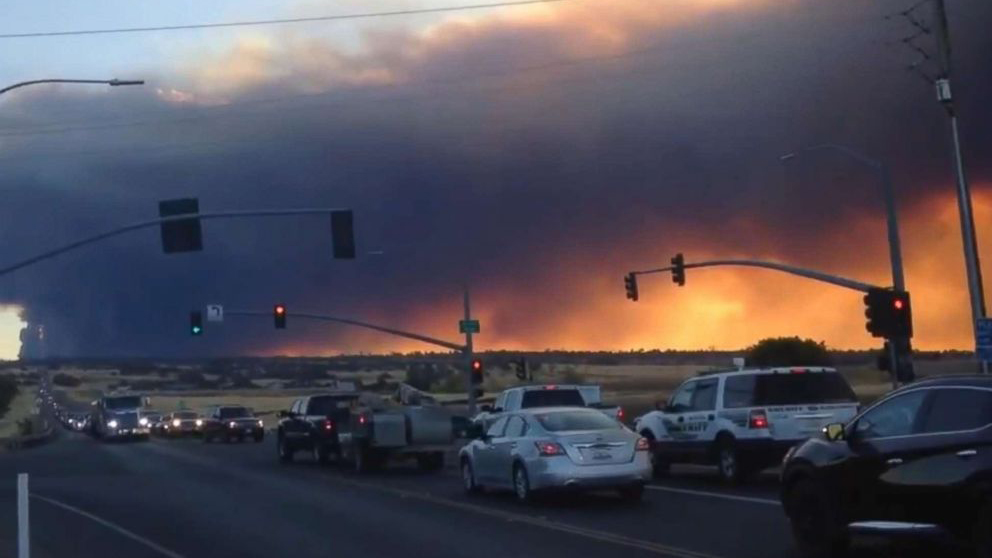 KRCR-TV(SACRAMENTO) — Mandatory evacuations are underway in Northern California as the Camp Fire continues to blaze through at least 20,000 acres.
The blaze is concentrated in the Feather River Canyon off Highway 70 in Pugla, a town about 50 miles east of Chico, the California Department of Forestry and Fire Protection announced on Twitter.
The entire town of Paradise was under evacuation as several homes in the area became engulfed in the fire, Cal Fire Public Information Officer Scott McClean said at a press conference Thursday. The blaze surrounded the Feather River Hospital, causing hospital staff to evacuate patients via life flight and search and rescue teams, McClean said.
The old portion of the hospital ended up in flames, officials told reporters Thursday afternoon.
Upwards of 1,000 structures face damage, Butte County Cal Fire Chief Darren Read said in the press conference.
The Butte County Sheriff's Office has received reports of multiple fatalities, but officials are trying to confirm those reports, Sheriff Kory Honea told reporters.
Dramatic radio calls among members of the Butte County Sheriff’s Department portrayed several terrifying emergency situations that unfolded amid the fast-moving fire.
One sheriff’s deputy described four people who were trapped in the basement of the Feather River Hospital in the audio obtained by KABC-TV.
"They’re safe underneath, but they can’t get out,” the deputy said before a dispatcher responded, “Tell them to shelter in place."
One dispatcher called in on a radio that there were still children inside the Pee Wee Preschool in Paradise, while another detailed 20 nursing home residents who were becoming “concerned” as the fire tore through the area.
Another sheriff’s deputy described his surroundings as “blackout conditions” as others detailed roads that were “completely blocked” due to roaring flames.
“It’s not looking good for…getting people out,” a sheriff’s deputy said.
Dispatchers described a woman in labor who was trapped in her Honda Pilot on the Skyway, a major roadway in Paradise.
“Pretty far along, complications, supposed to be a C-section,” a deputy who located her on the Skyway and Clark Road said. “This is going to be a situation, gonna be a life-flight out.”
Video footage taken by ABC Redding affiliate KRCR-TV showed the hospital surrounded by thick smoke as the fire illuminated the darkened sky in the background.
Fire officials characterized the inferno as explosive.
"It's the black of night at 9 a.m.," McClean said.
Weather forecasts showed numerous red flag warnings and wind alerts in the area Thursday into Friday. The fire was spreading at a rapid rate after it sparked around 6:30 a.m., expanding from 1,000 to 18,000 acres in a matter of hours.
Aerial footage showed giants plumes of smoke rise from a wooded landscape.
In Southern California, near Thousand Oaks and Newbury Park, the Hill Fire also sparked mandatory evacuations after it scorched through up to 10,000 acres by Thursday afternoon, according to the Ventura County Fire Department.
Evacuations have also been ordered in Camarillo Springs and Vicieto Trailer Park, according to the Ventura County Fire Department
The wildfire also closed down US Highway 101 in both directions near Cam Springs.
The Hill Fire started out as a 100-acre blaze Thursday afternoon but quickly ripped through 8,000 to 10,000 acres in just hours, according to officials.