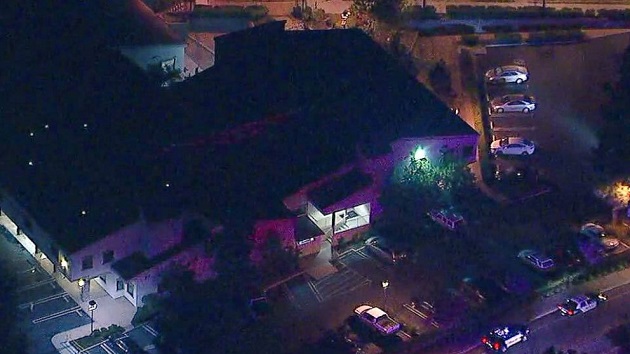 KABC-TV(THOUSAND OAKS, Calif.) — At least 12 people were killed and at least 10 others injured when a gunman burst into a packed Southern California bar overnight and opened fire, authorities said.
The lone suspect, David Ian Long, was found dead inside the Borderline Bar and Grill in Thousand Oaks, according to law enforcement officials briefed on the investigation.
His weapon appeared to be a legally purchased .45-caliber glock, the officials said.
Sgt. Ron Helus, a 29-year veteran who was about to retire, was among the dead, according to the Ventura County Sheriff's Department.
Helus was one of the first on the scene and was struck multiple times when he entered the building, the sheriff's office said.
Hundreds were inside the bar when police responded to the scene in Thousand Oaks, about 40 miles west of Los Angeles, just before midnight local time.
Teylor Whittler was celebrating a friend's birthday at the bar's college night when she heard the gunshots.
"A bunch of people dog-piled on top of each other," she told ABC News' Good Morning America. "Everyone just yelled, 'Run, he's coming!'"
"There were at least 50 people that all tried getting up at once and running out the back door. I ended up getting caught in the ground and stumbled over by multiple people," Whittler said. "I got hit in the head by a stool that was being picked up to throw through a window, until some guy came up behind me and grabbed me and said, 'Get up, we have to go!'"
She said multiple men around her blocked the group with their bodies "ready to take a bullet for every single one of us."
Whittler's friend, Sarah De-san, told GMA she was hiding behind a table when she saw a spark and smoke.
"As soon as we all saw that, we jumped up," she said. "I ran out the front door, down some stairs, face-planted in the parking lot, but I was lucky enough to get out alive."
"I'm terrified," she told GMA. "We're just praying for our friends that we haven't heard from. … You never think it's going to be you until it happens. This is a problem. This is real and it's awful."
"They were very, very loud gunshots," college student Erika Sigman told KABC-TV. "There were people in the middle dancing … you hear that and you just know."
"We got down because I heard people screaming, 'Everyone get down!" she said. "We heard people say, 'run!' and we booked it as fast as we could."
"I love this place — it's our usual hangout. My parents trust me going here," Sigman told KABC. "It's very hard to comprehend. I've lived here all my life."
The slain sergeant, survived by his wife and son, was looking to retire next year, the sheriff's office said.
Authorities are working to determine what the suspect's motive may have been.