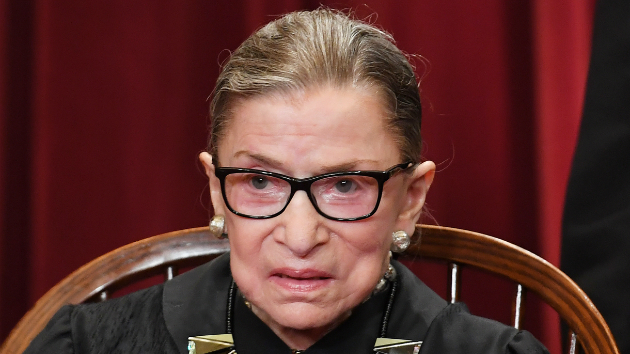 Matt McClain/The Washington Post via Getty Images(WASHINGTON) — Supreme Court Justice Ruth Bader Ginsburg suffered three fractured ribs Wednesday evening after falling in her office at the court.
Ginsburg, 85, was treated at George Washington University Hospital early Thursday morning and admitted for observation and treatment.
Ginsburg is one of four liberal-leaning judges, including Justices Stephen G. Breyer, Sonia Sotomayor and Elena Kagan. With the recent addition of Justice Brett Kavanaugh, President Donald Trump's embattled Supreme Court pick who faced sexual assault allegations during his nomination process, they are the minority on the court.
The president and first lady Melania Trump are scheduled to attend a meet-and-greet with Supreme Court justices Thursday morning, followed by the investiture ceremony for Kavanaugh.
Ginsburg has developed a reputation for her toughness and strength, both because of her rigorous personal training sessions in the Supreme Court exercise room, and because of the strides she's made for gender equality in the workplace.
She was one of nine women in her class at Harvard Law School, the first woman to be a tenured professor at Columbia University Law School and the co-founder of the Women's Rights Project at the ACLU.
Leading this project, she successfully argued six landmark cases before the Supreme Court.
Ginsburg has yet to miss a day of oral arguments, according to the law project Oyez from Cornell University and Chicago-Kent College of Law — not while undergoing chemotherapy for pancreatic cancer, recovering from surgery for colon cancer, or the day after her husband died in 2010.
Speaking to reporters on the White House lawn as the news of Ginsburg's fall broke, White House counselor Kellyanne Conway wished Ginsburg a "full and speedy recovery."
"We are praying for her and we know how tough she is. I’ve known her for many, many years," Conway said.

This is a developing story. Please check back for updates.
Copyright © 2018, ABC Radio. All rights reserved.

Justice Department cracks down on fraud cases connected to COVID-19
Rutgers University in New Jersey will require students to receive COVID-19 vaccine this fall
Save your hashtags: Warner Bros. says there won’t be a “SnyderVerse” after his re-cut ‘Justice League’
Leslie Jones’ live reaction to Wonder Woman in ‘Zack Snyder’s Justice League’ goes viral on Twitter
‘Zack Snyder’s Justice League’ debuts today on HBO Max
A year after her death, protesters take to the streets to demand justice for Breonna Taylor