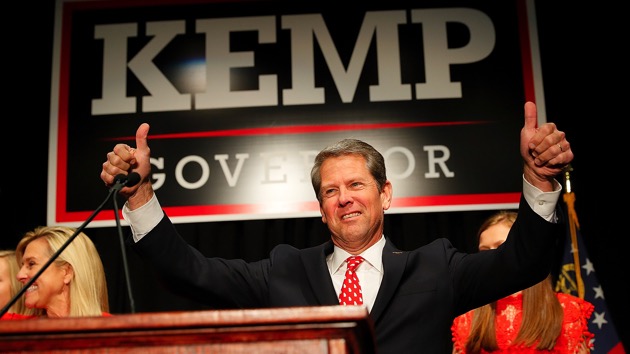 Kevin C. Cox/Getty Images(ATLANTA) — Georgia Secretary of State Brian Kemp has declared victory in the gubernatorial race and says he is stepping down as the state’s top election official Thursday to begin his transition to governor.
ABC News has not yet projected the winner of this race.
Kemp has been dogged by critics, including opponent Stacey Abrams and former President Jimmy Carter, who have urged him to resign throughout the course of the race because of potential conflict of interest as secretary of state, a position that encompasses overseeing of elections. Speaking at a press conference Thursday, Kemp said stepping down would "give public confidence to the certification process."
Asked why he chose to resign now, Kemp denied it was because of the criticism.
"I wasn’t really concerned about that but I think in light of where we are now, this will give public confidence to the certification process," Kemp said.
"We’ve had other Democrat secretaries of state serve in their own election many many times including a run for governor," he said. "I don’t feel like anyone was better suited than myself, but not only myself but my great team that we have in the elections division, the great partnership we have created with the county elections officials that actually run the Election Day today.” ABC News has not projected a winner in the race between Kemp and Abrams. ABC News does not project races that fall within a margin of 1 percentage point, because of concerns about errors in the vote tabulation or possible outstanding votes still to be counted. In Georgia, a winning candidate needs to clear 50 percent plus one to avoid a runoff.
While Kemp leads Abrams 51 percent to 48 percent, he is not more than 1 percentage point away from breaking 50 percent — which is required for victory in Georgia.
Kemp believes his lead is insurmountable. Republican Gov. Nathan Deal has also recognized him as the winner of the election.
Abrams is not conceding as she awaits a trove of provisional ballots to be counted and is preparing legal action for a potential recount. Her campaign believes there are enough votes still outstanding to force a runoff. A runoff election is required under state law if no candidates achieves a clear majority of the vote.
"How can anybody claim a victory when there are enough votes that have not been counted that could cause a run-off?" asked John Chandler, a member of Abrams' legal team, at a press conference held at the same time Kemp claimed victory Thursday morning.
Allegra Lawrence-Hardy, another member of Abrams' legal team, thanked voters for fighting to get their ballots accepted and said they were looking to file litigation later on Thursday.
"Stacey Abrams has been fighting for people her whole life and we are going to keep fighting for every voter," Lawrence-Hardy said.
Copyright © 2018, ABC Radio. All rights reserved.