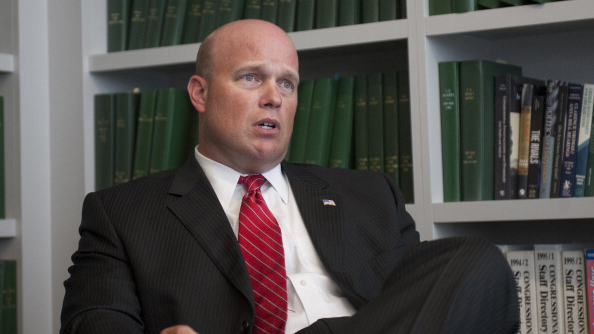 Douglas Graham/CQ Roll Call via Getty Images(WASHINGTON) — Matthew Whitaker, tapped by President Donald Trump as acting U.S. Attorney General, once made a key reception in a Rose Bowl football game, ran as a conservative Republican for the U.S. Senate in Iowa, and wrote an opinion piece arguing that special counsel Robert Mueller was "going too far" in his investigation of Russian meddling in the 2016 presidential election.
Whitaker, 49, was named the acting head of the U.S. Department of Justice (DOJ) after Jeff Sessions resigned Wednesday after being asked to do so by Trump, according to a letter Sessions sent to the president.
Trump has long been angered by Sessions' decision to recuse himself in March 2017 from the Russia investigation headed by Mueller.
Whitaker had been Sessions' chief of staff.
"We are pleased to announce that Matthew G. Whitaker, Chief of Staff to Attorney General Jeff Sessions at the Department of Justice, will become our new Acting Attorney General of the United States. He will serve our Country well….," Trump tweeted after accepting Sessions resignation.
Whitaker's appointment was met almost immediately with calls from the Democratic leadership for him to recuse himself from overseeing the Mueller probe.
House Minority Leader Nancy Pelosi slammed the appointment as an attempt to quash the Russia probe.
"It is impossible to read Attorney General Sessions’ firing as anything other than another blatant attempt by @realDonaldTrump to undermine & end Special Counsel Mueller’s investigation," Pelosi tweeted.
"Given his record of threats to undermine & weaken the Russia investigation, Matthew Whitaker should recuse himself from any involvement in Mueller’s investigation. Congress must take immediate action to protect the rule of law and integrity of the investigation. #FollowTheFacts."
Senate Minority Leader Chuck Schumer also called on Whitaker to recuse himself from the probe.
"Given his previous comments advocating defunding and imposing limitations on the Mueller investigation, Mr. Whitaker should recuse himself from its oversight for the duration of his time as acting attorney general," Schumer said in a statement.
Schumer later tweeted that: "Clearly, the President has something to hide."
Whitaker, a lawyer from Iowa, joined the Department of Justice in August 2017. It was his second stint at the DOJ, where he was appointed U.S. Attorney for the Southern District of Iowa in June 2004 by then-President George W. Bush. He resigned from the DOJ in 2009 after Barack Obama became president.
In his first tenure at the DOJ, Whitaker served on the Controlled Substances and Asset Forfeiture Subcommittee for the Attorney General's Advisory Committee and also served on the agency's White Collar Crime and Violent and Organized Crime subcommittees.
A month before joining the DOJ for the second time, Whitaker penned an opinion piece for CNN.com criticizing Mueller's Russia investigation.
"Last month, when President Donald Trump was asked by The New York Times if special counsel Robert Mueller would be crossing a line if he started investigating the finances of Trump and his family, the President said, 'I think that's a violation. Look, this is about Russia," Whitaker, then a CNN legal commentator, wrote in the August 2016 piece.
"The President is absolutely correct. Mueller has come up to a red line in the Russia 2016 election-meddling investigation that he is dangerously close to crossing."
Whitaker wrote that he found the possibility of Mueller digging into Trump's finances as part of the Russian probe "deeply concerning to me."
"He [Mueller] is only authorized to investigate matters that involved any potential links to and coordination between two entities — the Trump campaign and the Russian government," Whitaker wrote. "People are wrongly pointing to, and taking out of context, the phrase 'any matters that arose or may arise directly from the investigation' to characterize special counsel's authority as broad."
He also defended Donald Trump Jr. in a CNN interview for taking a controversial meeting in June 2016 with a Russian lawyer claiming to have damaging information about Hillary Clinton, then-candidate Trump's opponent for the White House.
"Anybody would have taken that meeting," Whitaker said in the July 2017 CNN interview.
Whitaker earned a master of business administration and a law degree at the University of Iowa. He also played tight end for the University of Iowa Hawkeyes football team that lost to the University of Washington Huskies in the 1991 Rose Bowl game in Pasadena, California.
"One of the greatest experiences I ever had as a Hawkeye was playing in that Rose Bowl game and having a catch," Whitaker said in the 2015 article in the Hawkeye Nation, a website for University of Iowa sports fans. "To this day I can brag to anyone who will listen that I had a catch in the Rose Bowl."
In 2014, Whitaker ran for the Republican nomination to fill the Senate seat vacated by Democrat Tom Harkin. He finished fourth in the Republican primary won by Joni Ernst, who went on to win the general election.
Following his foray into politics, Whitaker went back to practicing law, becoming managing partner of Des Moines-based law firm, Whitaker Hagenow & Gustoff LLP.
From 2014 to 2017, he served as the executive director of FACT, The Foundation for Accountability & Civic Trust.
Whitaker has also been a member of the University of Iowa Political Science Department Advisory Board and the National Association of Former U.S. Attorneys.

Walmart CEO optimistic about holiday inventory, comments on FTC supply chain probe
Matthew McConaughey announces he’s not running for Texas governor
Man stabbed to death near Penn Station; 2 sought in connection with attack
What’s it like to have a character balloon at the Macy’s Thanksgiving Day Parade? ‘Diary of a Wimpy Kid﻿’ author Jeff Kinney weighs in
Poll shows Matthew McConaughey would do more than all right, all right, all right if he ran for Texas governor
What we know about Chinese tennis star Peng Shuai as the UN calls for probe into her whereabouts