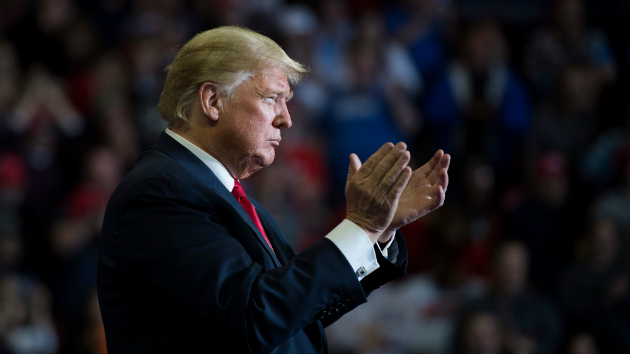 JIM WATSON/AFP/Getty Images(WASHINGTON) — President Donald Trump in a post-midterm press conference said he "stopped the blue wave," referring to the expectation of big Democratic wins.
Speaking in the East Room of the White House, Trump said that he held 30 rallies for Republicans the last 60 days and, "We saw candidates that I supported achieve tremendous success last night."
"This vigorous campaigning stopped the blue wave that they talked about. I don't know if there ever was such a thing, but there could have been if we didn't do the campaigning," the president said.
Trump earlier took to Twitter to congratulate Republican winners, to bid adieu to Republican losers who didn't embrace him and to say that now he has a clear path toward "foreign nations (friends) that were waiting me out, and hoping, on Trade Deals."
"Those that worked with me … did very well," the president tweeted. "Those that did not, say goodbye!"
As was widely expected, Democrats took back the House and Republicans maintained their Senate dominance.
Americans elected the first Muslim and Native American women among a record 110 women projected to join Congress.

There are many potential takeaways from Election Day 2018. Here are a few of the president's from Wednesday morning:

Received so many Congratulations from so many on our Big Victory last night, including from foreign nations (friends) that were waiting me out, and hoping, on Trade Deals. Now we can all get back to work and get things done!

Ron DeSantis showed great courage in his hard fought campaign to become the Governor of Florida. Congratulations to Ron and family!

Those that worked with me in this incredible Midterm Election, embracing certain policies and principles, did very well. Those that did not, say goodbye! Yesterday was such a very Big Win, and all under the pressure of a Nasty and Hostile Media!

When the new Congress sits in early January, it will look quite a bit different to the president.
"President Trump has been eroding the foundations of our democracy," Rep. Elijah E. Cummings, D-Md., the ranking mMember of the House Committee on Oversight and Government Reform, said in a statement released Wednesday. "He has been degrading the vision of our Founding Fathers — from attacking the right to vote to undermining the freedom of the press.
"Yesterday, the American people voted to change that. They voted for transparency and accountability. They voted to make sure our government works effectively and efficiently for the American people. And they voted to bring integrity back to government. As part of that mandate, I plan to shine a light on waste, fraud, and abuse in the Trump Administration. I want to probe senior Administration officials across the government who have abused their positions of power and wasted taxpayer money, as well as President Trump's decisions to act in his own financial self-interest rather than the best interests of the American people."
Copyright © 2018, ABC Radio. All rights reserved.

Appeals court weighs whether Justice Department should substitute for Trump in defamation suit
Biden declines comment on report Trump tested positive for COVID days before debate
As inflation concerns mount, Republicans, Democrats still at odds over Build Back Better plan
Ryan Reynolds on “bait” headline about him wanting to be James Bond: “I was not even remotely serious”
Travis McMichael testifies Ahmaud Arbery never verbally threatened him or pulled weapon
Humble “Sexiest Man” Paul Rudd thinks Keanu should have gotten the tap: “I would have voted for him”