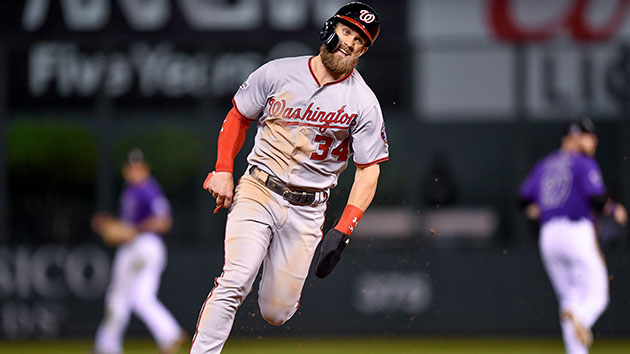 Dustin Bradford/Getty Images(NEW YORK) — The Washington Nationals made an offer to Bryce Harper late in the season in an attempt to reach a deal before he became a free agent.
At the general managers' meetings on Tuesday, Nationals general manager Mike Rizzo disclosed the team's talks with Harper's agent, Scott Boras.
The team made Harper an "aggressive offer" in September that included no opt-outs and was less than the $400 million Harper was speculated to receive, according to Washington Post reports.
Harper, who turned 26 last month, is expected to receive the largest contract among the 164 free agents. He is a six-time All-Star with 184 homers, 521 RBIs and a .900 OPS.
Boras is known for extending talks with his free agents past the holiday break. His clients include Nationals pitchers Max Scherzer and Stephen Strasburg, and former Nats outfielder Jayson Werth.
According to soruces, Boras is floating the notion that Harper could shift from outfield to first base which could open up negotiations with other teams.
Copyright © 2018, ABC Radio. All rights reserved.