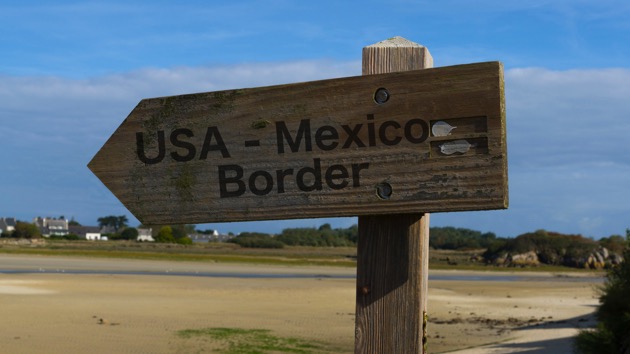 iStock/Thinkstock(WASHINGTON) — The day after a mid-term election in which President Trump played up the Pentagon's mission to provide logistical support along the southern border, the Pentagon said Wednesday it will no longer publicly refer to the mission as Operation Faithful Patriot. Instead, the deployment of active duty troops will be referred to as what it's always been: a border support mission.
“We are not calling it Operation Faithful Patriot, we are calling it a border support mission,” said Lt. Col. Jamie Davis, a Pentagon spokesman.
The name had been used by U.S. Northern Command for the 45-day deployment of more than 7,000 active duty personnel to support Customs and Border Protection (CBP) along the border ahead of the arrival of migrant caravans making their way to the border from Central America.
A U.S. official said the change occurred Tuesday at the request of Defense Secretary James Mattis. It was unclear if the timing of the request was tied to Election Day or if it was merely coincidental.
Two other officials said that the military can still use Operation Faithful Patriot internally, but not in public communication. One of the officials said this was being done to highlight that the military was not the lead for the mission, but was providing support to CBP along the border.
In the leadup to Tuesday's midterm election, President Trump often highlighted the deployment of active duty troops to the border support mission, though he did not refer to it as Operation Faithful Patriot.
But he often seemed to highlight it as more than a border support mission to CBP, particularly after active duty troops placed concertina wire along some ports of entry in Texas this weekend.
"Barbed wire looks like it's going to be very effective, too, with soldiers standing in front of it," Trump told a campaign rally in Cleveland.
Senior military officials have stated repeatedly that the active duty troops are only along the border in a support role to CBP.
"You’ll see some soldiers down there, right now, putting up concertina wire and reinforcing the ports of entry,' Gen. Joseph Dunford, the chairman of the Joint Chiefs of Staff, said on Monday.
"We’re providing both trucks and helicopter support and also some medical support," said Dunford.
"There is no plan for U.S. military forces to be involved in the actual mission of denying people entry to the United States," he stressed. " There is no plan for the soldiers to come in contact with immigrants or to reinforce Department of Homeland Security as they are conducting their mission. We are providing enabling capability."
U.S. Northern Command had been using #FaithfulPatriot #OFP and #OperationFaithfulPatriot on its Twitter account, but they had not been used on Wednesday.
However, Operation Faithful Patriot was still being used to describe the mission to the Pentagon's Operation Faithful Patriot imagery and video website.
Copyright © 2018, ABC Radio. All rights reserved.