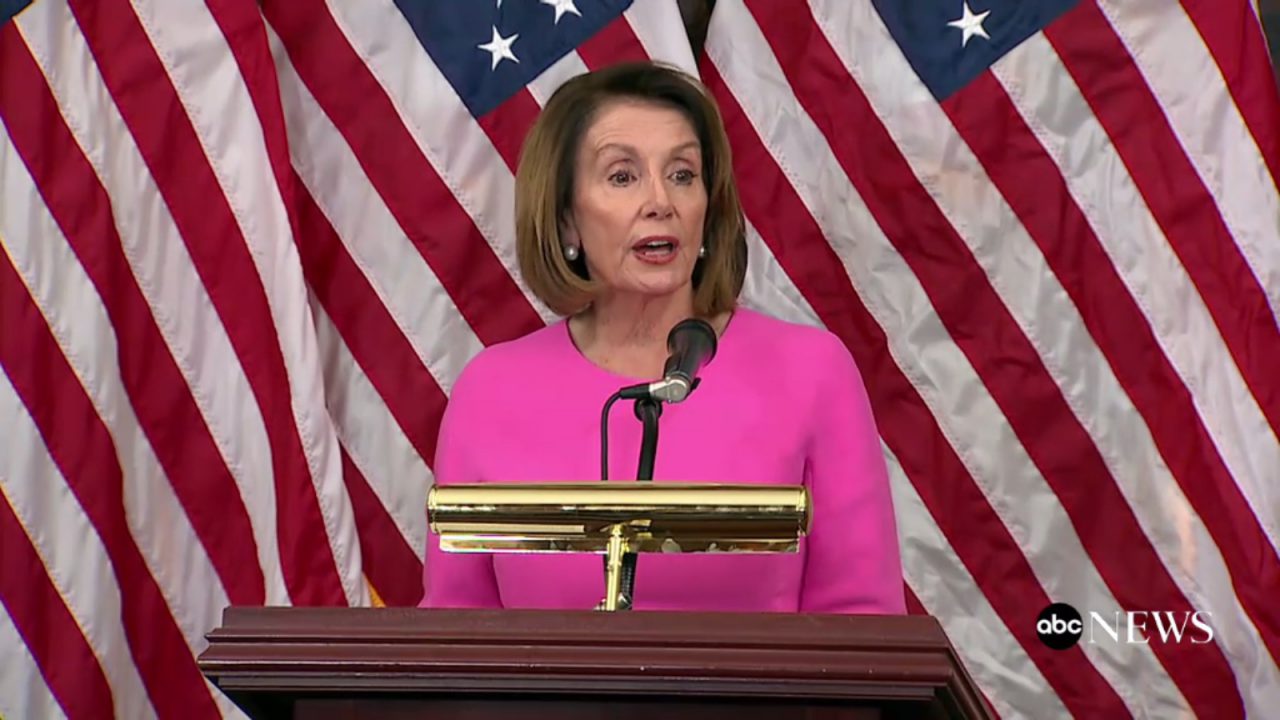 ABCNews.com(WASHINGTON) — House Minority Leader Nancy Pelosi, the front-runner to become Speaker of the House in the 116th Congress following Tuesday’s midterm election victory, said she is confident she will win her caucus’s support.
Pelosi deflected most questions about her speakership, insisting that her focus is on the Democrats’ legislative agenda in the next Congress. Pelosi said her message for newly elected Democrats who have pledged to oppose Pelosi’s candidacy for Speaker, is “congratulations on your election” and “welcome.”
She also expressed confidence she will be elected speaker.
“I heard the president say I deserve to be the speaker. I don't think anybody deserves anything,” Pelosi, D-Calif., told reporters at a news conference in the Capitol. “It's not about what you have done. It's what you can do. What you have done in the past speaks to your credentials. It's about what you can do. I think I'm the best person to go forward. So I think that my case is about being the best person for how we go forward.”
Asked by ABC’s Mary Bruce about President Trump’s warning that Democratic investigations could kill designs of any bipartisanship, Pelosi said the new Democratic majority will have “accountability for oversight.”
“This doesn't mean we go looking for a fight. It means if we see the need to go forward, we will. That's the work of our committees. Every committee has oversight responsibilities.” Pelosi explained. “Of course we're ashamed as a nation by a policy that takes babies out of the arms of their mothers, that builds tents and all the rest to house people in their separation of families. We want to look into that and we hope we can do that by simply having oversight. If it requires a subpoena, I hope not.”
Pelosi credited voters for electing “an extraordinary class of dynamic and diverse Democratic candidates” who she said “embody the bountiful diversity of our nation.”
“Women led the way to victory with at least 30 new women coming to the Congress. Is that not exciting?” Pelosi beamed.
“It's a great day for the American people,” she said. “The biggest winner yesterday was the health care for American people, for our seniors and hardworking American families. Health care was on the ballot and health care won.” Pelosi said that she spoke to Senate Majority Leader Mitch McConnell on Wednesday to explore working on a bipartisan infrastructure bill, and also received a congratulatory phone call from outgoing House Speaker Paul Ryan.
“In terms of working with the president, I would say that I worked very productively with President Bush when we had the majority and he had the presidency,” Pelosi recalled. “The president said, ‘I'll wait for them to send me something.’ We have ideas and we can send him something. The fact is we like to work together so our legislation will be bipartisan.”
While President Trump indicated that he does not want to release his tax returns because he claims they are under continuous audit, Pelosi said it’ll be up to the committees to chart a course of oversight and when to use subpoena power.
“I'm a believer in the committee system. Our committees will make their decisions and make their recommendations of the caucus. When we go down these paths, you'll know what we're doing,” Pelosi said.

Pelosi denounces faith-based attacks on Omar as ‘indecent’ and ‘dangerous’
Crime against disabled people is rising and advocates say more needs to be done
Keanu Reeves covers ‘Esquire’: his favorite Keanu films, if he’d do a Marvel movie & more
Poll shows Matthew McConaughey would do more than all right, all right, all right if he ran for Texas governor
Pelosi says House could vote Thursday evening on sweeping social spending package
Harris says she’s not being ‘underused,’ insists ‘we’re getting things done’