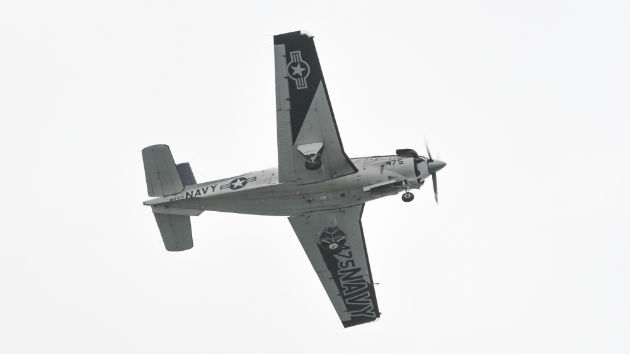 U.S. Navy photo by Mass Communication Specialist 2nd Class Timothy M. Black/Released(WASHINGTON) — The Marine Corps has grounded two aviators who were involved in flying a phallic-shaped flight pattern over California last month.
The flight pattern was drawn during a Marine training flight over Southern California’s Salton Sea, south of Palm Springs, on Oct. 23., officials said.
The phallic-shaped pattern gained notoriety on the internet after it was posted on Twitter by an aviation enthusiast who detected it using flight-tracking software.
The Marines quickly determined that the aircraft was a T-34C training aircraft assigned to Marine Fighter Attack Training Squadron 101, 3rd Marine Aircraft Wing, in Miramar, California, and said an investigation was underway “to uncover the facts and circumstances surrounding the incident.”
On Tuesday, the Marine Corps disclosed that two of its aviators had been grounded pending the results of the investigation.
“The T-34C crew that are being investigated for flying a pattern resembling an obscene image are currently not flying pending the results of an ongoing investigation,” said Maj. Josef Patterson, a spokesman for the 3rd Marine Air Wing.
“Although not flying for the time being, the two Marine Corps aviators are still providing vital squadron ground support functions,” said Patterson.
“Disciplinary or administrative action, if any, will be determined following the completion of the investigation,” he added.
The incident was not the first time that military pilots had carried out a similar flight pattern.
In November 2017, two Navy aviators stationed at Whidbey Island, Washington, drew a phallic shape with the contrails from their E/A-18 Growler fighter jets.
Officials at Naval Air Station Whidbey Island became aware of the pattern after local residents called attention to what they were seeing in the sky.
Both of the pilots involved in that incident later received administrative punishments.
Copyright © 2018, ABC Radio. All rights reserved.