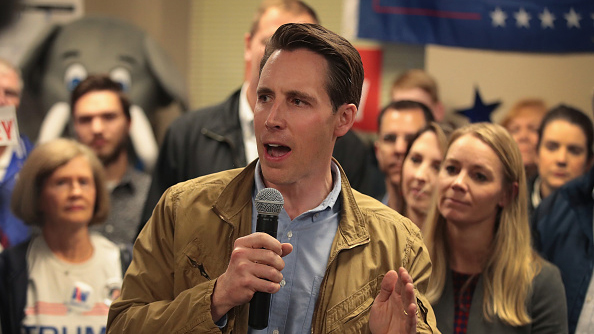 Scott Olson/Getty Images(NEW YORK) — Josh Hawley, the 38-year-old Republican Missouri attorney general who President Trump endorsed and vigorously campaigned for, unseated Democratic Sen. Claire McCaskill in a hard-fought battle to represent the "Show Me State" in the U.S. Senate, ABC News projects based on an analysis of the vote.
Hawley’s victory will give Missourians two Republicans in the Senate when he joins Republican Sen. Roy Blunt in Washington.
Hawley, the nation's youngest attorney general, quickly received backing from Trump, who rallied for him in Missouri many times. Hawley told ABC News there weren’t any areas where he would break from the president.
"You can expect me to be with the people of my state, the voters of my state, defending the interest of my state. Every single time," Hawley said. "I think that the President of the United States is doing a great job defending the interest of the people in Missouri, the state that voted for him by almost 20 points."
Throughout his campaign, Hawley hammered away at McCaskill's history of voting mainly with her party in the Senate and said Missourians were angry with their current representation in Washington, including McCaskill's decision to vote against both of Trump's Supreme Court picks, Brett Kavanaugh and Neil Gorsuch.
"There's a noticeable change in atmosphere here in the state and a noticeable surge in enthusiasm among Republican voters," Hawley told ABC News in a recent interview. "But also, I would say a noticeable surge in anger among all voters in my state."
Hawley, along with 16 other Republican attorneys general, signed onto a lawsuit that would strip some protections for people with pre-existing conditions under the Affordable Care Act, in contrast to his campaign ad saying that he would defend those patients if elected.
He has been a staunch advocate of the Republican plan to repeal and replace Obamacare, citing skyrocketing premiums over the past five years. If the ACA is repealed, though, coverage for pre-existing conditions disappears. Hawley has cited the possibility of reinstating a similar plan, separate from the ACA, to combat that problem.
During his campaign, Hawley specifically sought support from farmers by praising Trump’s trade policies.
"Farmers are so pleased with the job the president is doing. They gave him his margin here in the state of Missouri," he said.
Trump won the state by 19 percentage points in the 2016 presidential race.

Member of ‘Jena Six’ speaks out on race and the justice system 15 years later
Voting begins for Pennsylvania’s 2022 River Of The Year
Biden speaks to ‘incredible news’ inside sluggish November jobs report
Authors of color speak out against efforts to ban books on race
Hackers spoof Senator Dush’s email address
Jay-Z and Will Smith partner with ABC News for Emmett Till docuseries, ‘Let the World See’