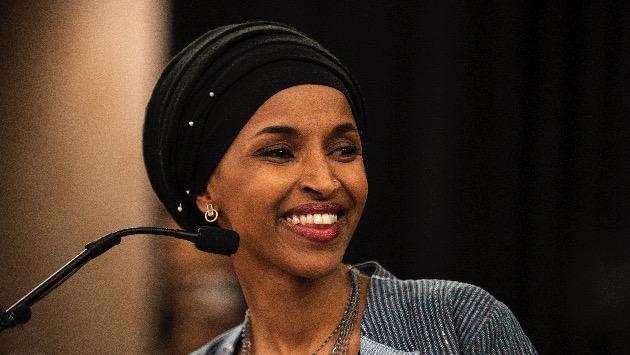 Stephen Maturen/Getty Images(NEW YORK) — Minnesota’s Ilhan Omar joined The View on Wednesday to talk about her journey making history as the first Somali-American to win a seat in U.S. Congress.
Alongside Rashida Tlaib of Michigan, Omar is also now one of the two first Muslim women to win a seat in Congress.
Omar shared her experience facing Islamophobia on the campaign trail, saying there are “people who are in positions of influence who look at someone like me, who’s Muslim, who is a woman, a black woman, an immigrant, a refugee — and don’t recognize me as an American.”
She said she won’t defend her identities. “What I defend is ideas,” she said.
“Once we are in positions to have conversations with people, it makes it hard for them to hate us up close — that is what our triumph and our victory is really about,” Omar added.
In February, Omar spoke openly about what she saw as the president’s prejudice against Muslims, saying there is no debate about “whether Trump is a racist.”
On The View Wednesday, Omar doubled down on those thoughts. “If they tell you who they are, believe them the first time,” she said. “This is someone who has cozied up to white nationalists… we should recognize him as what he is and more the conversation beyond him, beyond this divisiveness and to a place of hope, inclusion,” Omar added.
She attributed her success to her district’s decision “to use the politics of joy, and vote with our warm hearts, even though it’s a cold state.”
Omar says yesterday’s midterm election results show “clearly… that there is a rejection of politics of fear and divisiveness, that this is a country that really welcomes people and treats them like family, and don’t only just welcome refugees and immigrants, we send them to Washington.”
Omar was born in Somalia. After fleeing the country’s civil war, she spent four years in a refugee camp before coming to the U.S. when she was 14.
She says her message of hope “is that if you work hard and you believe in creating positive change within your community, you can achieve anything.”
Copyright © 2018, ABC Radio. All rights reserved.