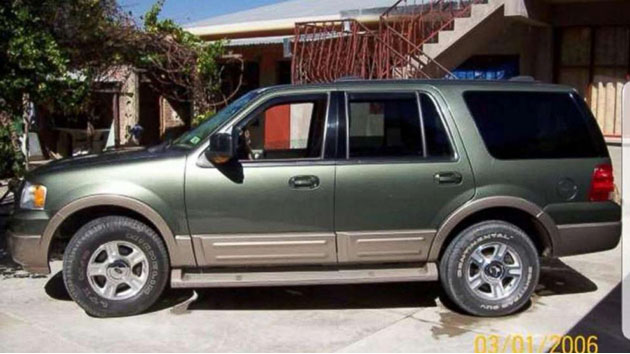 Lumberton Police(LUMBERTON, N.C.) — The FBI has released a new surveillance photo showing a stolen truck minutes after a 13-year-old girl was abducted in the car outside her North Carolina home.
Eighth-grader Hania Noleia Aguilar was kidnapped just before 7 a.m. Monday at the Rosewood Mobile Home Park in Lumberton, according to Lumberton Police.
Hania had grabbed her aunt's keys that morning so she could go turn on the car before school when a witness saw a man — dressed in all black with a yellow bandanna over his face — approach the girl and force her into the car, police said.
The suspect then stole the car and drove away with Hania, police said.
The FBI on Wednesday released this image snapped of the truck near Hania's home minutes after the kidnapping.
"We are asking anyone in the Lumberton area who may have a camera or video surveillance system to save the video and contact the tip line immediately at 910-272-5871," the FBI said. "Even if you do not see the vehicle in your video, please call the tip line anyway, as it may still contain important information."
The aunt's stolen car is described as a green 2002 Ford Expedition with South Carolina license plate number NWS984. The car has paint peeling from the hood and a Clemson sticker on the back window, police said.
This SUV image is similar to the car in which she was kidnapped, police said.
When Hania was abducted, her relative ran to a neighbor for help, and at 6:54 a.m., they dialed 911, the FBI said.
"We were going to school," the caller said frantically, when a “man came and took the girl and the truck.”
The caller spoke in Spanish and the dispatcher incorporated a translator into the conversation, the FBI said.
"Every second counts when a child is missing," Lumberton Police Chief Michael McNeill told reporters Tuesday.
There is no indication Hania was targeted, officials said.
Hania is described as a Hispanic girl who is 5 feet tall and weighs about 126 pounds, the FBI said. She has black hair and brown eyes and was last seen wearing a blue shirt with flowers and blue jeans.
The FBI is offering a reward up to $15,000.