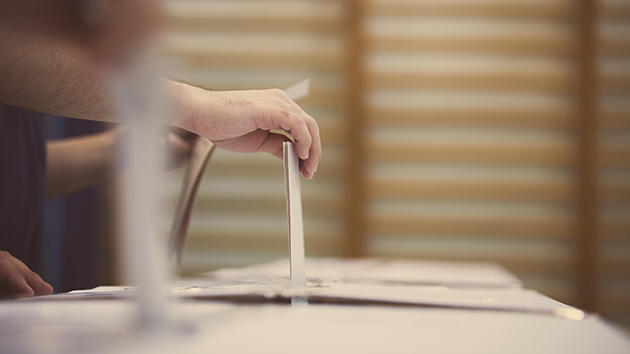 iStock/Thinkstock(NEW YORK) — Exit polls are surveys conducted as voters leave polling places on Election Day.
Reaching voters at that moment helps ensure that the people surveyed actually cast ballots, avoiding uncertainty on that matter that sometimes occurs with telephone polls.
Critical questions of who won and why, which are reported on election night, are answered mainly from exit-poll results.
How are exit polls conducted?

Interviewers stand outside polling places in randomly selected precincts and attempt to talk to voters on their way out at specific intervals — every third or fifth voter, for example.
Voters who agree to participate in the poll fill out a short questionnaire and place it in a ballot box.
Interviewers phone in results three times during the day. When a voter refuses to participate, interviewers note the gender and approximate age and race of that voter. In this way, the exit poll can be statistically corrected to make sure all voters are fairly represented in the final results.
What sort of questions are asked in an exit poll?

The typical exit poll questionnaire asks questions that attempt to answer the following: Who the voters cast ballots for in key races; what opinions they hold about the candidates and important issues; the demographic characteristics of the voter.
Here's an example of a 2018 exit poll issue question:
Do you think the condition of the nation's economy is:
1. Excellent
2. Good
3. Not so good
4. Poor
Are exit polls accurate?

Exit polls, like any other survey, are subject to sampling errors. Before news organizations report any exit poll results or make projections, they compare results to pre-election polls and the voting history in that precinct, and have statisticians and political experts carefully review the data.
After polling places close, exit poll results are weighted using the actual vote count to make the data more accurate. Even projections that are made without any actual vote data are not based solely on the results of exit polls.
How do exit polls account for the people who vote early or by mail?
In the 2014 election, just over a third of Americans voted before Election Day, using some form of absentee or early voting.
hat percentage is on track to be even higher in 2018. Capturing information about these voters is challenging, but it is critical to report accurate information about all voters.
In states with a high number of people who vote absentee or early, telephone polls are conducted to reach those voters. In some states with a lot of early in-person voters, exit polls are conducted with these voters as they leave the polling place. Data from polls of absentee and early voters are combined with the Election Day exit poll data to provide a complete portrait of all voters.
When will exit poll results be reported?

On Election Day, there is a strict quarantine on any news coming from the early waves of exit poll data until 5 p.m. ET. By about 5:45 p.m., some initial demographic information about voter turnout will be available on ABCNews.com.
Winners will not be projected until polls are closed, so announcements come on a state-by-state basis as individual state polls close. Information will be constantly updated throughout the evening on ABCNews.com and on all ABC News programs.
Copyright © 2018, ABC Radio. All rights reserved.

Amid spread of omicron variant, CDC expected to require negative COVID-19 test 1 day before flying to US
World AIDS Day: A time for remembrance, a time for hope
Ghislaine Maxwell accuser ‘Jane’ testifies on Day 2 of trial
What’s next for Amazon union election in Alabama after do-over is ordered
Prosecutors question Elizabeth Holmes, 1 day after she leveled abuse claims against her former partner and company COO
Ghislaine Maxwell accuser ‘Jane’ called as witness on Day 2 of trial