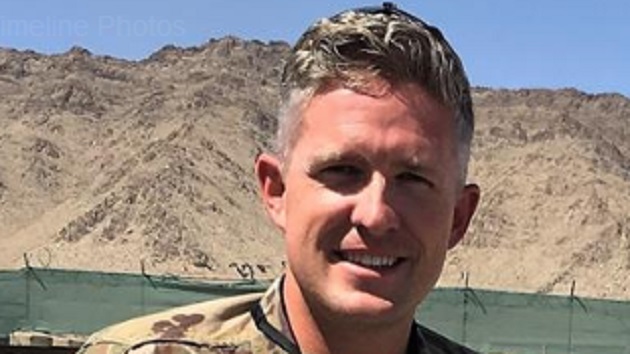 Facebook/Brent Taylor(NORTH OGDEN, Utah) — The widow of Maj. Brent Taylor said Tuesday that it was "fitting" that the remains of her slain husband were returned to the United States on Election Day. Taylor, a Utah National Guardsman who was also the mayor of North Ogden, Utah, was slain in an insider attack in Afghanistan this past weekend.
In his final Facebook posting a week ago Taylor had encouraged everyone to vote and offered a reminder "that we have far more as Americans that unites us than divides us."
Taylor's remains were returned to Dover Air Force Base early Tuesday morning.
An Army honor guard carried the flag-draped transfer case containing his remains from a civilian transport plane into a transfer vehicle.
Top Army and National Guard officials were on hand to support Taylor's widow and the two oldest of their seven children.
"I personally cannot find words adequate to tell you all that I feel as I stand here this morning by the dawn's early light," Jenny Taylor later told reporters. "And so I echo the words someone recently shared with me, Brent may have died on Afghan soil but he died for the success of freedom and democracy in both of our countries."
"It seems only fitting that Brent who in death now represents so much more than anything, something so much greater than any of our own individual lives, has come home to U.S. soil in a flag-draped casket on our election day," she said.
"It is timeless and cherished honor to serve in our country’s armed services. That honor has been Brent’s has he served in the Utah National Guard for the past 15 years. And it has been mine just as long as I have proudly stood by his side."
She said she shared her husband's "timeless and cherished honor to serve in our country's armed services."
"And it has been and will continue to be the great honor of our seven children for the rest of their lives and I pray for many generations to come," she said.
"The price of freedom sure does feel incredibly high to all those of us who know and love our individual soldier," said Taylor. "But the value of freedom is immeasurable to all who know and love America and all that she represents."
She recalled his final Facebook post from October 28 where he urged friends to vote and offered a reminder that "we have far more as Americans that unites us than divides us."
"As the USA gets ready to vote in our own election next week, I hope everyone back home exercises their precious right to vote. And that whether the Republicans or the Democrats win, that we all remember that we have far more as Americans that unites us than divides us. “United we stand, divided we fall.” God Bless America," he wrote.
Taylor was on his fourth deployment overseas, his second to Afghanistan, when he was shot and killed on Sunday in an insider attack carried out by a member of the Afghan security services. The attacker was killed by other Afghan forces.
One other American service member who was wounded in the attack is currently undergoing medical treatment but in stable condition, according to a NATO statement.
Taylor was elected mayor of North Ogden in 2013 after serving on the City Council since 2009. He held a bachelor's degree in Political Science from Brigham Young University and a Master of Public Administration from the University of Utah, according to the North Ogden city website. He was a current Ph.D. candidate at the University of Utah in International Relations.