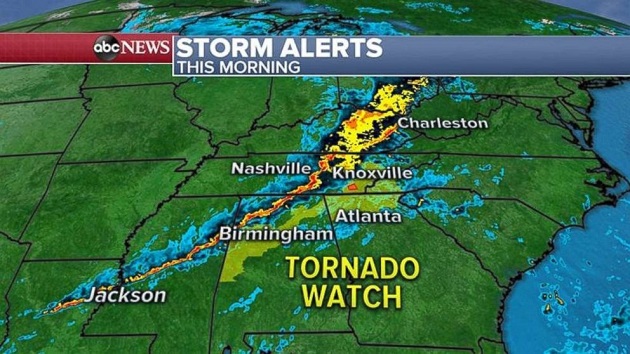 ABC News(NEW YORK) — At least one person is dead after a possible tornado tore through parts of Tennessee, bringing heavy rain and dangerous wind gusts.
Authorities said a woman died and two others were injured overnight when a possible tornado ravaged a neighborhood in Rutherford County, Tennessee.
The deceased woman's identity was not revealed, but police said her home collapsed when the severe weather hit the Midland area of Christiana, Tennessee. Two others were injured in a mobile home that was damaged and rolled over during the storm. A third person was injured but refused treatment.
"The two occupants stated that they felt like they were tumbling," an official with the Rutherford County EMS told reporters early Tuesday. "Both of those were transported to a local area hospital for further evaluation, and then we had one person that signed a refusal saying that he did not want to be transported out of another house that had some damage."
The area was under a tornado watch, according to the National Weather Service. The service warned that parts of eastern Tennessee, Alabama, Georgia and North Carolina could experience damaging winds, tornadoes and heavy downpours this week.
Overall, there were more than 40 damaging storm reports between Louisiana and Kentucky, including a possible tornado in Louisiana.
Severe storms are forecast to move into the I-95 corridor throughout Election Day, impacting areas from the Carolinas to mid-Atlantic states, including the cities of Richmond, Virginia; Ocean City, Maryland and Washington, D.C.
Rain will be changing to snow in the Upper Midwest and into the Great Lakes, with some accumulation possible from North Dakota's Bismarck to Fargo and into Minnesota's Twin Cities. Meanwhile, snow is expected in the northern Rockies, where locally a half a foot possible.
Warmer weather is expected in the southernmost parts of the country, from Los Angeles across to southern Florida.