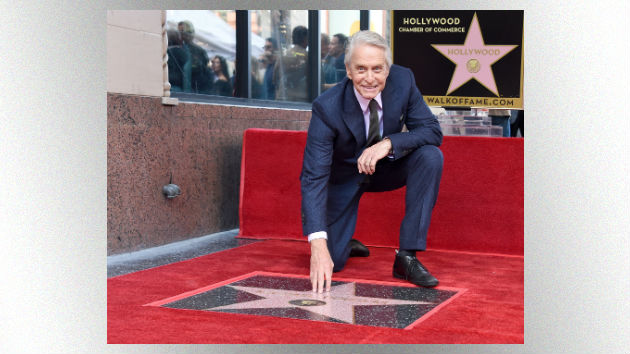 Gregg DeGuire/Getty Images(HOLLYWOOD) — Michael Douglas received a star on the Hollywood Walk of Fame Tuesday, in recognition of his 50-year anniversary in the entertainment business.

He accepted the honor with his wife Catherine Zeta-Jones, his son Cameron, and his 101-year-old father, movie legend Kirk Douglas, looking on.

"My dad is here," Michael said during his speech at the ceremony. "In a month, Kirk turns 102 years old. So those of you who took the under on him making 80, you lost a long time ago."

He continued, getting choked up, "It means so much to me, Dad, that you're here today. I'll say it simply and with all my heart: I'm so proud to be your son."

Douglas received a star near the corner of Hollywood and Vine, just a few feet from his father’s own star.

His China Syndrome co-star Jane Fonda was a guest speaker at the ceremony, and she talked about how they both had to deal with the challenges of having fathers who were movie legends.

"Michael has not only carved out his identity as a great, great actor with tremendous range, but as a great producer as well,” Fonda said. “He has rightfully been bestowed with all of the awards Hollywood has to offer… and now finally, a star on the Hollywood Walk of Fame."

Douglas is starring in a new Netflix series, The Kominsky Method, debuting on November 16.