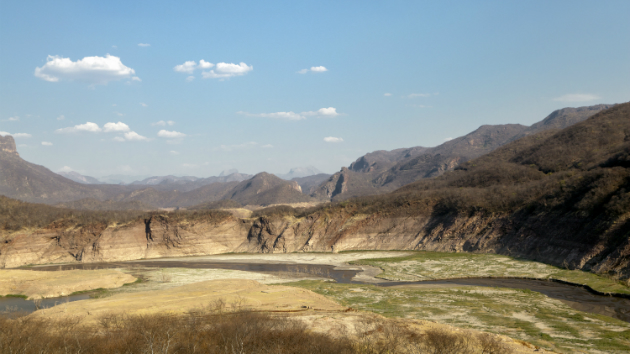 Jorge Duarte Estevao/iStock/Thinkstock(CHARLOTTE, N.C.) — More than 100 police officers in Mexico are searching through the deep river gorges of one of the country's national parks for a North Carolina teacher last seen more than a week ago, according to reports.
Patrick Braxton-Andrew, 34, is believed to have been hiking at the Copper Canyon National Park in Mexico's northwestern state of Chihuahua when he went missing, ABC North Carolina affiliate WSOC-TV reported. He was last seen by staff at the hotel he was staying at in Urique, a former mining village at the base of one of the national park's canyons, according to WSOC.
Braxton-Andrew left North Carolina for Chihuahua on Oct. 24, according to a statement from his father posted by the alumni page for Braxton-Andrew's alma mater, Davidson College, last week.
The next day, he boarded a train to Copper Canyon and spent the night in Posada Barrancas in Divisadero, a stopover town on the way to Copper Canyon, and it is believed that he arrived in Urique on Oct. 26 or 27, his father said.
Braxton-Andrew's parents last had contact with him at 2:51 p.m. on Oct. 28. He was supposed to meet his brother in Mexico City on Tuesday but "did not show up," the statement read.
The family has determined that he went missing Sunday afternoon after leaving for a walk around 4 p.m. in the Urique area. The owner of the hotel there said he never returned from his walk, his father said.
The national park is home to a network of massive canyons and deep river gorges, many larger than those in the Grand Canyon, according to Geo-Mexico.com.
Braxton-Andrew's parents were in Tulum on an "unrelated vacation" when he went missing and are continuing to reach out to U.S. officials from Mexico, according to the father's statement.
Braxton-Andrew is an eighth grade Spanish teacher at the Woodlawn School in Mooresville, a private school for kindergarten through 12th grades, according to the school's website. He had previously worked for the Davidson College study abroad program in Peru, his biography stated.
He is fluent in Spanish and had traveled abroad and to Central America "regularly," according to the family.
Braxton-Andrew's family has created a Facebook group and Twitter account dedicated to finding him.
The search for Braxton-Andrew has extended to neighboring towns, according to an update posted on Saturday.
Additional details were not immediately available.
Copyright © 2018, ABC Radio. All rights reserved.