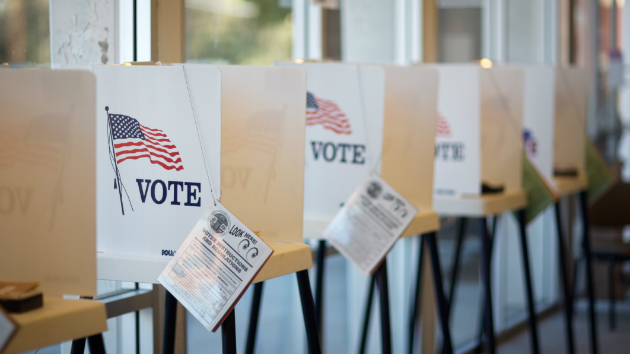 iStock/Thinkstock(NEW YORK) — It's been a long run — a fact few can attest to more than the candidates on the trail — but Election Day 2018 is finally here.
This year’s midterms are the first nationwide contests since 2016, when President Donald Trump was elected. Many, including Trump, see this election as a referendum on his presidency.
"I'm not on the ticket, but I am on the ticket because this is also a referendum about me," Trump said at a rally in Southaven, Miss., in early October.
With Republicans currently in control of the White House and both chambers of Congress, 35 Senate seats, all 435 seats in the House and 36 governorships are on the ballot.
The Election Day 2018 Live Map shows when polls close around the country and, as votes begin to get counted, will show hourly state-by-state results for the Senate, House and governorships.
Here's the latest:
LIVE UPDATES

11:59 a.m. ET — House Minority Leader Nancy Pelosi is confident Democrats will win control of that chamber of Congress in Tuesday's election.
Asked at a press conference if she is 100 percent certain her party will become the majority in the House, the California Democrat said, "Yes, I am."

11:32 a.m. ET — Trump retweeted a tweet he had initially posted Monday morning that warned about "illegal voting."
The tweet reads, "Law Enforcement has been strongly notified to watch closely for any ILLEGAL VOTING which may take place in Tuesday’s Election (or Early Voting). Anyone caught will be subject to the Maximum Criminal Penalties allowed by law. Thank you!"

10:49 a.m. ET — Humid weather is reportedly causing problems in some election precincts in North Carolina.
North Carolina's state elections office said it has received reports that ballots in some precincts in Wake County and other areas cannot be fed through tabulators. But officials said "procedures are in place for these types of events."
"Initial reports from county elections offices indicate this issue is caused by high humidity levels. When ballots cannot be ready by tabulators, they are stored securely in 'emergency bins' and will be tabulated as soon as possible," the board said in a statement Tuesday morning. "All ballots will be counted."
10:20 a.m. ET — Democrats in Florida voted prior to Election Day in slightly higher numbers than the state's Republicans.
More than 5.2 million Floridians in total cast ballots either by mail or early voting. Of that number, 2,110,782 were Democrats and 2,088,429 Republicans, according to newly-released data from the Florida Division of Elections.
10:03 a.m. ET — Newspapers across the U.S. splashed headlines conveying some of the emotion and tension around this election.
Here are a few of them.
– The Columbus Dispatch: "It's up to you now"
– Connecticut Post: "Midterm mania grips nation"
– Chicago Tribune: "A fight for control"
– The Des Moines Register: "IT'S DECISION DAY"
– The Detroit News: "Battle for Congress spirited until the end"
– Houston Chronicle: "DAY OF RECKONING IS HERE"
– Los Angeles Times: "Trump's reputation is on the line"
– New York Daily News: "YOUR CALL, AMERICA
– The Oregonian: "Ready or not, it's finally Election day"
– Orlando Sentinel: "FIERCE RACES AWAIT DECISIONS"
– The Washington Post: "Uncertainty rules as the midterms reach the wire"
9:46 a.m. ET — Mark Salter, longtime aide and speechwriter for the late Sen. John McCain, a Republican, urged his Twitter followers to "vote for the Democrat (in most cases).
"That feels weird to write," Salter tweeted. "But the bigger the rebuke of Trump the better for the country. Resist."
McCain was one of Trump's most outspoken Republican critics. The Arizona senator died in August at age 85 after a yearlong battle with brain cancer.
9:17 a.m. ET — Former Secretary of State Hillary Clinton, the Democratic candidate who ran against Trump in the 2016 presidential election, made a final appeal to voters.
"For the past two years, we've watched this administration attack and undermine our democratic institutions and values. Today, we say enough," Clinton wrote in a series of tweets.
"But we won't just vote against radicalism, bigotry, and corruption today. We'll vote for fantastic candidates all over the country—including a historic number of women—who want to raise wages, fight for justice, and help more people get health care," she tweeted.
"If they win, they’ll do great things for America. Let's exercise our birthright as Americans today, put those people in office, and continue the hard work of saving our democracy. It'll take all of us. Happy Election Day."
7:43 a.m. ET — Authorities in some states are warning voters to be vigilant about possible election problems.
The New Jersey Department of State urged residents via Twitter to beware of "false information regarding your polling locations."
High enthusiasm evident in early voting

The conversation ahead of the midterms has been dominated by talk of Democratic enthusiasm that could bring a "blue wave."
Democrats appear more poised for victory in the House, where they need a net gain of 23 seats to win the majority. In the Senate, Democrats would need a net pickup of two seats to take control, but there are 10 vulnerable Democratic senators running in states Trump won in 2016.
Early voting has also been read as a signal that enthusiasm is up — though in some states, it's a result of newly-expanded early voting opportunities. According to data from Michael McDonald, an early-voting expert at the University of Florida, 2018 early voting has already significantly surpassed 2014 figures.
As of Friday, over 30 million early ballots were cast, compared to 17 million as of the same day in 2014.
According to the latest ABC News/Washington Post poll, the top issues driving voters this year are health care and the economy, which are almost tied in importance, followed by immigration. Democrats have made health care — and especially coverage for people with pre-existing conditions — a key part of their platform, while Trump has significantly upped his rhetoric on immigration, using a migrant caravan that's weeks away from the U.S. border to bring the topic to the forefront.
A diverse set of candidates

Despite ingrained partisan positions on these issues, the candidates running for election across the country this year are diverse, and many are poised to make history.
If elected, Democrat Stacey Abrams, running for governor in Georgia, will be the first African-American woman governor in U.S. history. Three other states south of the Mason-Dixon line could also elect their first-ever African-American governors.
It could be a historic year for Native American women as well. In the House, Sharice Davids of Kansas and Debra Haaland of New Mexico, both Democrats, could become the first Native American congresswomen. And, Paulette Jordan, a Democrat running for governor of Idaho, could become the country's first Native American governor, as well as her state's first female governor — and its first Democratic governor since 1999.
There are also two female Muslim congressional candidates, Rashida Tlaib in Michigan and Ilhan Omar in Minnesota, who are poised to make history as well.
And Vermont is poised to make history for the LGBTQ community if voters in the Green Mountain State oust their current governor in favor of first-time candidate Christine Hallquist, who would be the first transgender governor in the nation if elected on Tuesday.
In some states, both candidates on the ticket offer diverse and historic choices.
In New Hampshire, Eddie Edwards, a Republican, would be the state’s first African-American member of Congress. His opponent, Democrat Chris Pappas, would be its first openly gay member of Congress.
And while many individual candidates could be historic change-makers, taken together, there are also some record-breaking numbers.
More women, for example, are running for Congress than ever seen before.
In the House currently, 84 of the 435 members are women, while a staggering 239 women are on the ballot Tuesday. They range from former fighter pilots to intelligence officers, doctors, nurses and scientists. By a 3-to-1 margin, the women candidates are Democrats.
Veterans are also on the ballot in record numbers. According to a nonpartisan veterans' super PAC, over 200 military veterans are running for Congress — a stark number considering there are fewer veterans in Congress today, at 20 percent, than ever before.
Polls in competitive races begin to close at 7 p.m. EDT and continue through 1 a.m. EDT.
After months of fundraising, advertising, door knocking and block walking, the candidates have made themselves known.
Now it's up to the voters.
Coverage of the 2018 midterms on ABC News Live:
Get full election coverage on ABC News Live beginning today at 4:30 p.m. EST at ABCNews.com/Live, on the ABC News app and on Roku, Hulu and Facebook.
Copyright © 2018, ABC Radio. All rights reserved.