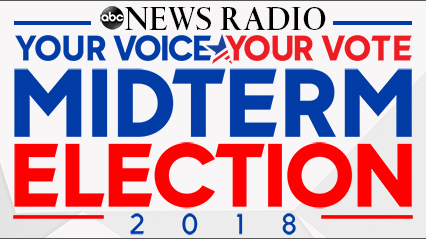 ABC News(NEW YORK) — President Donald Trump and control of Congress are front and center in this election, and preliminary results from the national exit poll touch on both of them:
In results so far, 44 percent of voters approve of Trump’s job performance, while 55 percent disapprove.
And while the House races will be fought district by district, voters by 53-43 percent say they’d rather see the Democrats than the Republicans in control of the House after this election.
Antipathy toward Trump doesn’t reach majority support for impeachment – 41 percent of voters support impeaching the president and removing him from office, with 55 percent opposed. Still, 39 percent say they cast their ballots to show opposition to Trump, vs. 26 percent who say they voted to show him support. (33 percent say he didn’t figure in their vote.)
There are vast divisions among groups on Trump and control of Congress, and voters recognize today’s political polarization. 77 percent say Americans are becoming more politically divided, while just 8 percent see greater unity. (13 percent see no change.)
Indeed, even with the economy its best in decades by many measures, just 41 percent say the country is headed in the right direction, while 56 percent say it’s seriously off on the wrong track. There’s a huge gulf between Republicans and Democrats on the question, but among independents, often swing voters, 58 percent say wrong track vs. 39 percent right direction.
While preliminary exit poll results indicate a preference for Democratic control of the House, neither party is beloved. Voters divide 50-46 percent in favorable vs. unfavorable views of the Democratic Party. The GOP fares worse – 43-54 percent, favorable-unfavorable. Nancy Pelosi, a Republican bugaboo in the campaign, trails her party’s favorability rating – and Trump's approval rating – at 31-55 percent, favorable-unfavorable.
In one more eye-opening preliminary result: 51 percent of voters today say the government has not done enough to protect this election from foreign interference.
In terms of group sizes – which can change, these are preliminary results only:
Party ID: Democrats account for 38 percent of voters in exit poll results so far, Republicans for 32 percent and independents for 30 percent. That compares with 36-37-27 percent in 2014, and 37-33-29 percent in 2016.
Ideology: Liberal-moderate-conservative group sizes in results so far are 27-38-36 percent. That compares with 22-39-38 percent in the 2014 midterms. (And 26-38-36 percent in 2016.)
Sex: Women account for 52 percent of voters in preliminary results, matching their previous high in a midterm from 2010.
Race: Nonwhites account for 28 percent of voters nationally in preliminary results. The highest in any previous midterm was 25 percent in 2014. These compare with a low of 9 percent in 1990.
Key Issues
Among key issues in the campaign – beyond Trump himself – preliminary exit poll results indicate the following:
Immigration: With the Central American caravan drawing broad attention in the campaign, voters divide on Trump’s immigration policies – 48 percent say they’re too tough, 32 percent say they’re about right and 16 percent say they’re not tough enough.
Health care: Voters by 58-34 percent pick the Democratic Party over the Republicans as more likely to protect health care for people with pre-existing conditions, another central focus of the 2018 campaign.
Further, given a choice of four issues, 41 percent pick health care as the top issue facing the country, compared with 21 percent for the economy, 23 percent immigration and 11 percent gun policy. (We’ll look at vote preferences in each group as the night proceeds.)
Kavanaugh: Any impact of the controversial confirmation of Brett Kavanaugh to the Supreme Court may come down to state-to-state races. Nationally, the country divides – 43 percent support his confirmation, 48 percent oppose it in preliminary exit poll results.
Tax and trade: Two of the president’s signature economic policies get a mixed reception. Fewer than a third of voters, 28 percent, say they’ve been helped by the Trump tax law (45 percent no impact, 23 percent hurt by it.) And just 25 percent say Trump’s trade policies have helped their local economy. 31 percent say they’ve hurt, 36 percent say they've had no effect.
Women: As noted, women account for 52 percent of voters in preliminary results, matching their previous midterm high from 2010. And there’s a tremendous gender gap in views of president Trump’s work in office: While men voting today divide 50-49 percent on Trump, approve-disapprove, that goes to 39-60 percent among women voters. And while 57 percent of men approve of Kavanaugh’s confirmation, just 43 percent of women agree.
Sharp gender differences extend elsewhere. Voters by 78-20 percent call it important to elect more women to public office; 53 percent of women call it “very” important, vs. do 37 percent of men. That may play out in the unusual number of races including female candidates this year.
And 84 percent of voters today call sexual harassment a serious problem in the United States, including 47 percent who call it very serious. 52 percent of women vs. 40 percent of men call sexual harassment a very serious problem. In an even bigger gap, 64 percent of Democrats call it very serious, vs. 40 percent of independents and 29 percent of Republicans.
This is a developing story. Please check back for updates.

New poll finds nearly half the country would vote for Dwayne Johnson if he ran for president
Civic groups file lawsuit challenging absentee ballot provisions in Georgia’s election law
Georgia lawmaker who knocked on governor’s door during election bill signing won’t be prosecuted
Breaking down claims about Georgia’s election law: What’s true and what’s not?
Pennsylvanians reminded to register to vote by May 3 for primary election
Sharon Osbourne reportedly getting millions in a settlement after exit from ‘The Talk’ amid racism controversy