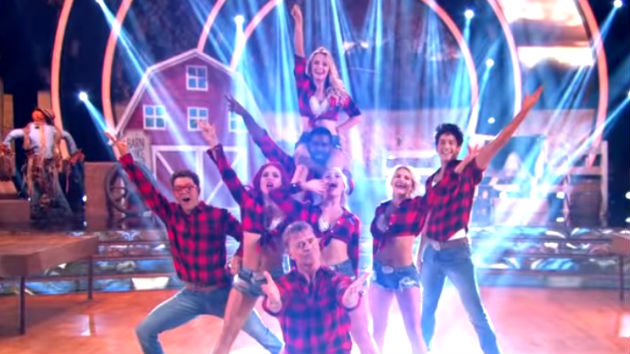 ABC(LOS ANGELES) — Dancing with the Stars went country Monday night as the remaining couples danced to country hits, and top country stars Cole Swindell, Chris Janson, Carly Pearce, Lauren Alaina and LANCO performed. At the end of the night, there was a double elimination: Both John Schneider and Emma Slater and Demarcus Ware and Lindsay Arnold were eliminated.

It was a very emotional night for Schneider. The Dukes of Hazzard star was in tears in his video package as he talked about his divorce and his estrangement from his three adult children; he teared up again after he and Emma performed, as he spoke about how his time on the show was helping him deal with all that.

There were two perfect scores: Juan Pablo DiPace and Cheryl Burke scored a 30/30 for doing a Charleston to the Hunter Hayes song "One Shot," while Evanna Lynch and Keo Motsepe also got perfect 10s for their rumba to Carly Pearce's "Every Little Thing." Keo was so excited about his 10 that he ran down the stairs and across the ballroom to hug and kiss judge Len Goodman.

And he wasn't the only one. After Bobby Bones and Sharna did a Viennese Waltz to Elvis Presley's "Can't Help Falling In Love" — performed by Chris Janson — Bobby told Len he'd kiss his face if the judge gave the couple an eight. Len did, and Bobby did. He also kissed and hugged Bruno Tonioli when he gave them an eight.

And there was even more kissing as Alexis Ren — who revealed last week that she had feelings for her partner Alan Bersten — was told by Alan that he felt the same way. Then, they shared a tender smooch. Len also declared their samba to Lauren Alaina's "Ladies in the '90s" to be the best routine of the night.

In addition to the individual dances, there were also two group numbers: Team Hay Now, captained by Bobby, scored a 29/30 for their dance to Dolly Parton's "9 to 5," beating out Team Joe Down, captained by "Grocery Store" Joe Amabile. They received a 26/30 for their sexy performance set to Luke Bryan's "Country Girl (Shake It For Me)."

And after miraculously avoiding being the bottom scorer last week, Joe and his partner Jenna Johnson once again tumbled to the bottom of the leader board, scoring 21/30 for their tango to Dierks Bentley's "Burning Man."

Marvel Studios releases hour-long version of Daniel Brühl dancing after #ReleaseTheZemoCut trends
New poll finds nearly half the country would vote for Dwayne Johnson if he ran for president
Off-duty correctional officers allegedly run over group of people, crash through Taco Bell
Morgan Freeman stars in new COVID-19 vaccine PSA: “If you trust me, you’ll get the vaccine”
NCAA group condemns anti-transgender sports bills in open letter
NASA’s Mars helicopter survives first night on its own, gets set for first flight on another planet