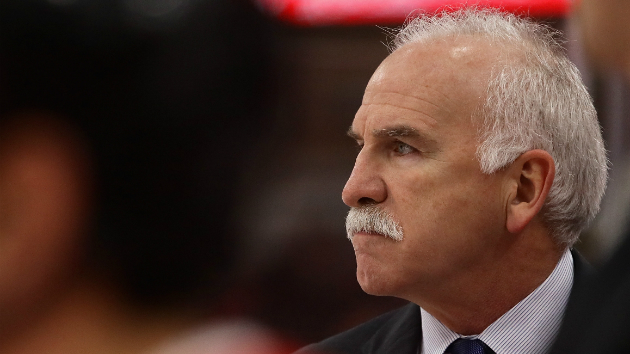 Jonathan Daniel/Getty Images(CHICAGO) — The Chicago Blackhawks have parted ways with Joel Quenneville, the second-winningest head coach in the franchise’s history.
In a press release Tuesday morning, the team announced that it has relieved Quenneville of his coaching duties and named Jeremy Colliton as its next head coach. At 33 years old, Colliton is now the youngest head coach in the NHL.
"This was an extremely difficult decision, given our respect for Joel and all that he has brought to the Chicago Blackhawks organization the last 10 years,” Blackhawks President and CEO John McDonough said in a statement.
Quenneville, 60, came on board as the Blackhawks’ head coach in 2008. Since then, the team has posted a record of 452-249-96 in 797 games.
Under his leadership, Chicago has made it to the playoffs nine times and has won three Stanley Cups — in 2010, 2013 and 2015. With a record of 76-52, Quenneville holds the best playoff record in the team’s history.
“His leadership during three Stanley Cup championships speaks for itself and there is no way to adequately express what he has meant to this organization,” McDonough said. “He will always be a significant member of the Blackhawks family.”
But last season, the Blackhawks failed to advance to the playoffs for the first time in a decade, with a record of 33-39-10, which put them in last place in the Western Conference’s Central Division.
The team’s slump appears to be continuing this year as they hold the second-worst record in the division at 6-6-3.
“[A]s we look to a future history not yet defined, we believe the change we made today, will provide the Chicago Blackhawks a critical element in achieving our goals of Championships in the future, including this season,” Blackhawks Chairman Rocky Wirtz said in a statement.
Copyright © 2018, ABC Radio. All rights reserved.