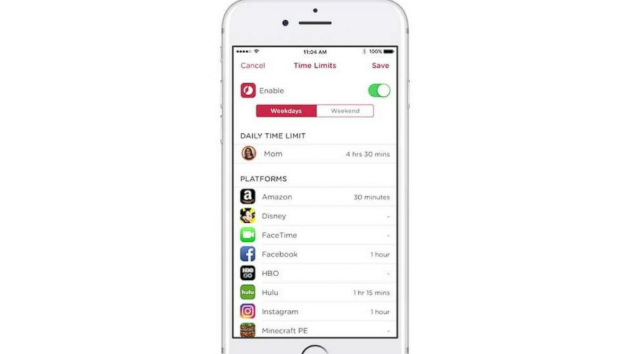 Circle Media Labs, Inc.(NEW YORK) — Conflict around screen time limits are taking a massive toll on families and new apps and hardware have sprung up to try and address this pain-point.
ABC News asked the Sargent family of Phoenix, Arizona, to try a leading product in the device control and monitoring space called Circle with Disney. (Disclosure: ABC's parent company, Disney, has a licensing agreement with Circle).
The small hockey puck-sized gadget plugs into a power outlet and then wirelessly connects to your WiFi router. Using an app installed on the parent's phone, all family members are given unique accounts. As they sign into various devices around the house (phones, tablets, computers and gaming consoles) Circle tracks their cumulative usage on all devices.
Each family member can be assigned time limits. The limits can be tracked across devices: two hours of screens a day totaled up from usage on the Xbox, tablet and/or computer. The limits can also be device or app specific — one hour of Xbox or 30 minutes of Snapchat. Finally, Circle can schedule blackout times — no access after 9 p.m.
Circle has an accompanying mobile app that can be added on for $4.99 a month that will impose the same restrictions and usage logging on a child’s phone when they are out of the house and on cellular networks. It can shut down all apps so that the child’s phone can be solely used to text and call.
For ABC News' test family, the Sargents including their three children (aged 10, 7 and 4), the device definitely helped reduce conflict. Dad Henry said the kids had to make their own choices about time and practice self-regulation.
"They’re able to regulate the time frame without us having to dictate for them," he said.
Mom Carle added: "They know they get 30 minutes: after school if their chores are done [or] they can watch it before bed. It’s kind of up to them.”
Both parents said it was liberating. Before Circle, Carle said it was tough to monitor the kids' usage: she couldn’t make dinner, help with homework and keep track of who was on what device for how long.
She also said she would nag and remind the kids to get off their devices "but now Circle just shuts down their computer, so you don’t have to do any reminding. Their 30 minutes is up and their device just shuts down. That’s fabulous."
Circle costs $99 and if you want the add-on Circle Go functionality for kids with cellphones, it’s an additional $4.99 a month. The device does have filtering and reports so it helps with content management in addition to time management.
Circle and a competitor Koala Safe may be the best options for children under 13 who access multiple devices. But there are other options if your child only uses one device or if they are older and you don’t need as many controls.
If your child only uses a single iOS device, try Apple’s free parental control features. Within any iOS 12 or subsequent operating system, you can designate a child’s phone as a part of your “family” and then use new parental controls to limit times of the day the child can access the device, apps they can open and control the types of content they can see.
For Android users, parental control apps have been around for a while. PC Magazine did a roundup of the best Android options and lists Qustodio as its top pick. It costs $49.95.
For older kids, a new product in the parental control space called Zift makes monitoring information for parents look a lot like your Facebook feed. The idea is to keep parents apprised of kids' actions in real time. It aims to be a more scalable approach as tweens and teens mature. Yes, it can create on/off schedules to make a child's device inaccessible during homework or bedtime hours. Yes, you can pause the child’s device remotely. But its real power comes in the filtering and the alerts it provides in real time for the issues parents fear most: porn, drugs, weapons and suicide.

Zift is free for basic features but offers in-app purchases for some of the logging and scheduling features.