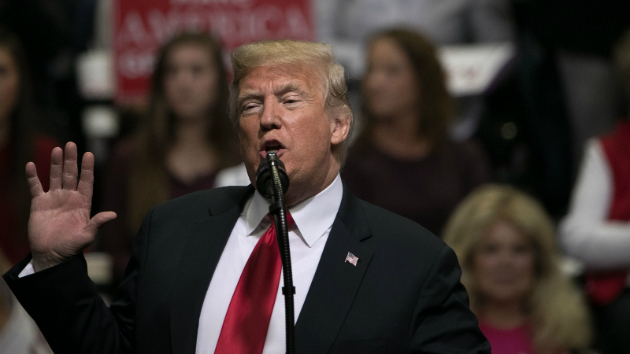 Alex Wong/Getty Images(CHATTANOOGA, Tenn.) — President Donald Trump turned out another massive crowd in the Volunteer State, touting Tennessee’s slate of Republican candidates in his second rally Sunday — with three more stops scheduled Monday in the Midwest.
Although many pundits predict Democrats will enjoy a blue wave next Tuesday to sweep them back into power, the president projected couched confidence that Republicans will be victorious.
"I think we are doing great in the House. I think we are doing great in the Senate, but who knows? You gotta get out and vote!" Trump said. "There is an electricity in the air — the likes of which I and you have not seen since the ’16 election. And you don’t hear so much about that big blue wave anymore. [Democrats] may do fine. They may do fine. Who knows?"
Despite those electoral reservations, Trump touted Tennessee’s candidates across the board, including U.S. Senate hopeful Rep. Marsha Blackburn and the GOP’s candidate for governor, Bill Lee.
"It’s a great group. You really do. You got a great group. And I know they’re all winning big and all that stuff. Go vote anyway. We don’t want to take any chances," he stressed. "We don’t want to take any chances that we get a little carried away with ourselves so go out and vote."

"I don’t want to see any extremely depressed former congressmen from Tennessee," he joked.
Trump asserted that if Tennesseans "wanna stop the liberal agenda of high taxes and high crime, you need to vote for Marsha Blackburn."
"On Election Day I need the people of Tennessee to send a message to Cryin’ Chuck Schumer, Nancy Pelosi, Maxine Waters, and the radical resistance by voting for Marsha Blackburn," Trump said.
Trump even attempted to appeal to Democratic voters to rally around the "nationalism" that has become a central theme of his campaign rallies.
"I am asking every citizen from every party, every background, and every race, color, and creed – to reject the Democrat politics of anger and division and unite behind our proud and righteous destiny as Americans," he said. "I need you to get your family, get your friends, get your neighbors, get your coworkers and go out and vote Republican. Do it now. Do it Tuesday. We have to get it done."

But that didn’t stop the president from bashing Democrats.
"Our opponents are stuck in the past while we are rebuilding and going into America’s great future," Trump said.
Trump holds three final rallies on Monday, beginning in Cleveland, before going onto Fort Wayne, Indiana. Later Monday, the president holds his last campaign event in Cape Girardeau, Missouri.
Copyright © 2018, ABC Radio. All rights reserved.

Biden declines comment on report Trump tested positive for COVID days before debate
Amid spread of omicron variant, CDC expected to require negative COVID-19 test 1 day before flying to US
World AIDS Day: A time for remembrance, a time for hope
Ghislaine Maxwell accuser ‘Jane’ testifies on Day 2 of trial
What’s next for Amazon union election in Alabama after do-over is ordered
Prosecutors question Elizabeth Holmes, 1 day after she leveled abuse claims against her former partner and company COO