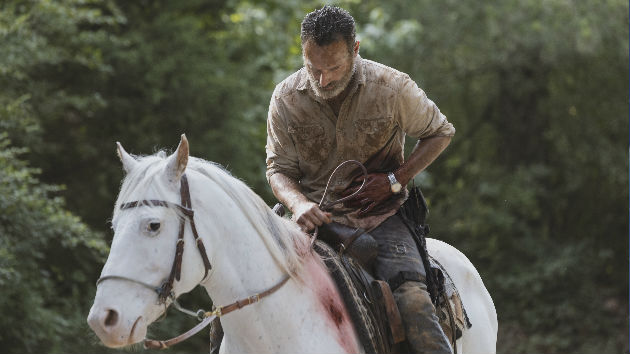 It should be noted, however, that AMC announced when the show ended that Rick's adventures will continue in a series of AMC movies.
The episode began moments after last week's left off: Rick is in the same hospital as the pilot episode, looking at his younger self — who turns to him and tells himself to wake up.
In real life, Rick comes to, impaled, but now conscious. Painfully, he pulls himself free, and mounts a horse.

Meanwhile, Anne — formally Jadis — is negotiating her escape with the helicopter voice. Fading, bleeding, a hallucinating Rick remains just ahead of the horse on horseback.
Also on horseback, elsewhere, is Maggie and one of the Kingdom folks. They come across a walker and Maggie bashes its brains in; overkill, as if testing her mettle for Negan.
Meanwhile, Rick finds an abandoned cabin and applies a tourniquet as best he can before he passes out again. Hallucinating, he sees himself back in Atlanta. He's with Shane, back in their patrol car, talking smack.
Shane reminds him — and the audience — that little Judith is his kid, not Rick's. Taking it in stride, Rick is trying to make amends when Shane launches at him.

Rick's snapped back to reality and the horde is all over him in the cabin. He barely scrambles out.

At Alexandria, Maggie shows up, bound for Negan. Michonne blocks her path. "You think Glenn would want this?" she asks Maggie. "For you to go through me?"

Maggie faces off with Negan through the bars and orders him to his knees. He immediately goes to work on her mentally, taunting her about Glenn.
She feeds the key into the cell lock. Demands he move into the light. Negan suddenly drops all his attitude and pathetically cries for her to kill him. He begs to be with his dead wife. Maggie demands he get back in his cell.

"I came to kill Negan. You're already worse than dead."

He cries, defeated, back inside his cell. "It wasn't supposed to be like this," he says to himself.
Maggie meets Michonne outside and they share a smile.
Rick is hallucinating again. He's with Herschel now, again making amends. Rick then sees people we know to still be alive, dead on a massive pile. And then he sees Sasha — who's also dead. He tries to make amends with her, too. Like the others, she tells him to wake up.
Rick's back in the real world. He stumbles into the bridge camp, where Carol tussled with the Saviors in last week's episode.
Dispatching a few of the newly undead, the horde bears down on Rick. He makes it to the incomplete bridge, and it looks bleak.
Just then, Daryl and his friends show up and plow through the horde. He tries to give up but, Michonne takes him in her arms and she won't have it. "This isn't real," he says…"Wake up!" she tells him, as the others did.
He shambles across the bridge just as another walker gets closer…Daryl, real this time, takes it out. Then another. His friends try to run to him. Instead, as the horde gathers on the span, Rick draws up on a cache of dynamite and blows the bridge…and seemingly, himself.
His friends think he's dead…
Rick's body washes up on shore elsewhere, as we see Anne as the chopper approaches. She tucks her pistol to the side, seeming to be ready to force her way aboard.
The chopper voice asks if she has the "A" person she promised. She didn't, and intended to trick them — until she spots Rick. "I have a 'B' she pleads. He's strong but he's hurt. I have to save a friend, someone who saved me. Do we have a deal?!"
Rick barely wakes up on board the chopper, to see Anne. "You're gonna be OK, she says. "They're gonna save you." They're headed who knows where as we fade to black.
We see some new survivors in a clearing, surrounded by walkers.
Just then, shots ring out, clearing a path, and a little girl's voice calls out, showing them the way.
It's a little girl, around 10, holding a silver Colt Python. Rick's pistol. Camera pans up to show her with a katana strapped to her back. "I'm Judith," she says. "Judith Grimes."

Years have apparently passed: when we last saw her, she was four or five.

The Walking Dead returns next Sunday, November 11, at 9 p.m. on AMC.

Kevin McCarthy defends Rep. Lauren Boebert after anti-Muslim remark, downplays House infighting
What to expect from the college championship conference games
What is known about the omicron variant that’s arrived in the US
Patrons of recent New York anime convention urged to get tested for Omicron variant after positive case
Texas law restricting access to abortion pills goes into effect: What to know
Strangers donate breast milk after mom of newborn dies of COVID-19