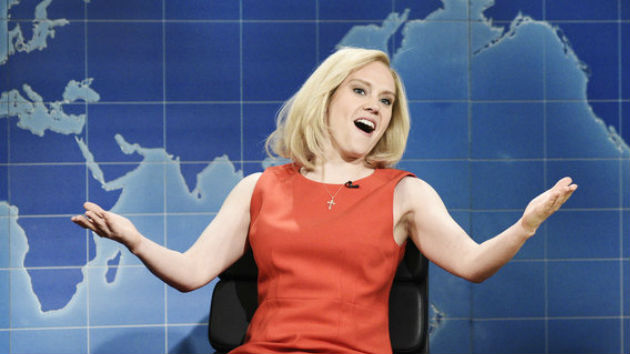 NBC/Will Heath(NEW YORK) — Saturday Night Live tackled the issue of immigration and the caravans traveling from Central America through Mexico on the last show before the midterm elections.

The cold open featured a sendup of Fox News’ The Ingraham Angle — with Kate McKinnon playing conservative host Laura Ingraham — in full panic mode over the approaching caravan of mostly Honduran immigrants making its way north through Mexico. The caravan is still weeks from making it to the border, but that didn't stop her guests — Cecily Strong as Jeanine Pirro and Kenan Thompson as David Clarke — from joining her in warning the viewers to be concerned.

"It's an absolute disgrace," Pirro responded, to which Ingraham responded, "What is?"

"Just whatever you're talking about," Strong's Pirro responded.

Pirro also showed two videos claiming they were the caravan, when in reality they were a clip of crazy Black Friday shoppers and zombies storming a wall in the Brad Pitt film World War Z.

"We believe he’s actually dating the caravan, which people are labeling the 'Bradavan,'" Pirro said.

Ingraham also discussed sending troops to the border, declaring, "The goal is to have five soldiers for every one shoeless child," and checked in with Clarke, the former Milwaukee County, Wisconsin Sheriff.

"The immigrants are 800 miles from our border," he warned. "If these immigrants walk at a normal pace of 300 miles per day they could be here to vote on Election Day."

In a not-so-veiled shot at Trump's pledge to end birthright citizenship, he said, "We’ve also learned that all of the women in the caravan are nine months pregnant and are waiting until exactly after they cross the border to give birth."