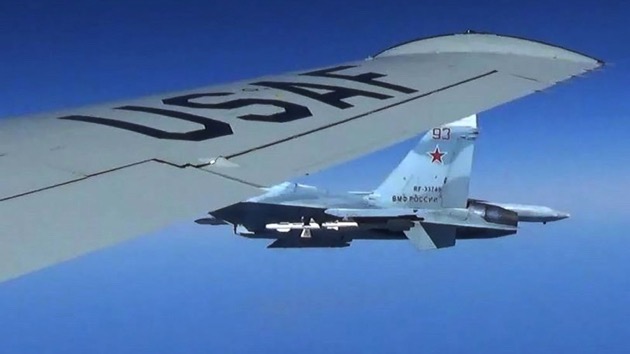 US European Command
Posted on November 5, 2018 by ABC News

US European Command(WASHINGTON) — A Russian fighter jet flying at a high rate of speed buzzed a U.S. Navy reconnaissance plane as it flew in international airspace over the Black Sea Monday — an intercept that the Navy labeled “unsafe” and “irresponsible."
Harrowing video footage of the encounter released by the Navy also shows the Russian fighter turning on its afterburners to bank in front of the Navy plane, an action that created vibrations felt by the crew inside the American aircraft.
Eric Pahon, a Pentagon spokesman said that what made the intercept was unsafe was that “they didn’t establish radio contact, they came really really close to our aircraft.”
“There’s just absolutely no reason for this type of behavior,” said Pahon, who noted that the American aircraft was flying a routine mission in international airspace “and the Russian aircraft kind of came out of nowhere and did not one, but two passes close to our aircraft.”
Pahon said the last unsafe encounter with a Russian aircraft in European airspace occurred in January.
The 25-minute encounter occurred over international waters over the Black Sea on Monday as the Navy EP-3 Aries reconnaissance aircraft was intercepted by a Russian SU-27 fighter jet.
“This interaction was determined to be unsafe due to the SU-27 conducting a high speed pass directly in front of the mission aircraft, which put our pilots and crew at risk,” said a statement issued by the Navy’s Sixth Fleet.
“The intercepting SU-27 made an additional pass, closing with the EP-3 and applying its afterburner while conducting a banking turn away," it added.
The crew aboard the EP-3 reported “turbulence following the first interaction, and vibrations from the second.”
While the Navy acknowledged that the Russian military “is within its right to exercise within international airspace” it criticized the encounter for being “irresponsible."
“The U.S. aircraft was operating in accordance with international law and did not provoke this Russian activity,” said the statement.
It was not clear how close the Russian aircraft had come to the American plane.
Whether the U.S. military labels an air encounter is unsafe or unprofessional has less to do with the distances between aircraft and more with the behavior of the pilots intercepting the aircraft.
The Navy said it expected the Russian military to act within international norms and warned that “unsafe actions increase the risk of miscalculation and potential for midair collisions.”
Copyright © 2018, ABC Radio. All rights reserved.