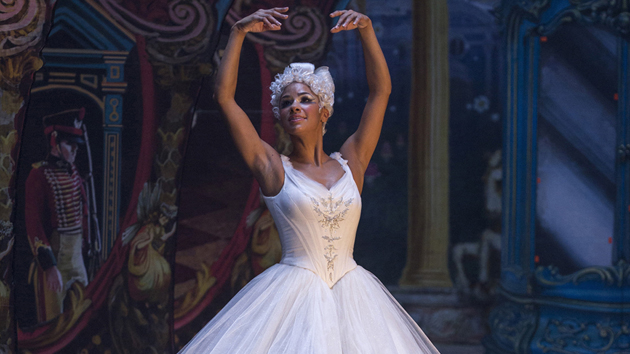 Disney(NEW YORK) — Misty Copelandmakes her feature film debut in the new Disney film The Nutcracker and the Four Realms.

Copeland, who plays the Ballerina Princess in the film, tells ABC Radio that there are definitely similarities between acting and doing ballet.

"It's amazing because as a dancer we do all of it — is all combined," she says. "Like, I'm an actress on stage. I'm acting through movement, like, without words."

However, while she enjoys the challenge of transforming on stage and on camera, Copeland says her mind is very focused on dance and she currently has no plans to pursue acting full time.

"You know, I ventured into that briefly when I did the Broadway show On the Town and I had to sing and I had to speak and everything and it was… I grew, I feel like in leaps and bounds," she explains. "But I'm still so dedicated and focused to my career as a professional ballerina. But, I never want to say no about anything in the future that's possible. But, right now I have no acting bug."

The Nutcracker and the Four Realms is in theaters nationwide.

Preliminary results lean ‘no’ in Amazon union vote count
Biden’s infrastructure plan, with no GOP support, gets boost from Senate ‘reconciliation’ ruling
Silver or White? No way. More drivers are demanding customization
Gwyneth Paltrow admits she had “no idea” on how to be a stepmother
After relaxing “No Zoom” policy, Oscars opening awards-night venues in Europe
Texas trooper ‘no longer displays signs of valuable brain activity’ after being shot