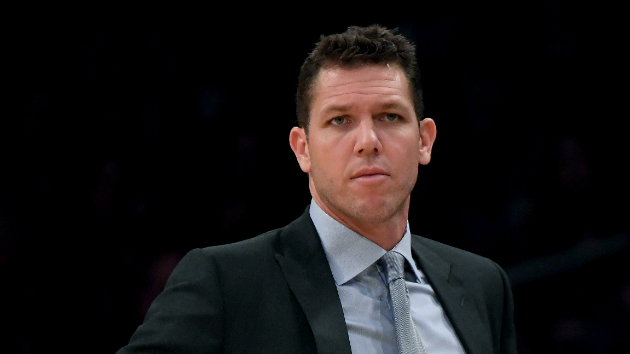 Harry How/Getty Images(LOS ANGELES) — Despite an abysmal showing against the Toronto Raptors in the first quarter of Sunday night's game, Luke Walton's position as the head coach of the Los Angeles Lakers is not in jeopardy, according to Magic Johnson.
Johnson, the team's president of basketball operations, told ESPN Sunday "we're not going to fire him."
His remarks came during the first quarter of the game, in which the Lakers trailed the Raptors, 42-17. The 25-point deficit marked one of the worst first quarters in the team's history.
According to ESPN, Los Angeles has "never been outscored by more than 24 points in a first quarter in the shot-clock era (since 1954-55)."
The Lakers went on to lose the game to Toronto, 121-107.
Earlier on Sunday, Johnson told the Los Angeles Times that he didn't have any plans to remove Walton as head coach, barring something drastic happening.
When asked Sunday night to explain what would qualify as a drastic circumstance, Johnson declined to elaborate, saying, "No, not going into that. He's our coach, we support him, and that's it."
Copyright © 2018, ABC Radio. All rights reserved.