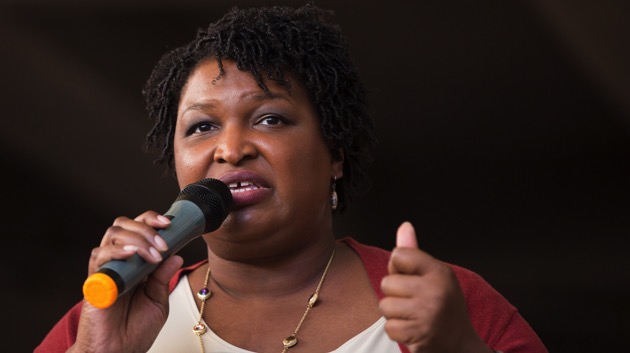 Jessica McGowan/Getty Images(ATLANTA) — Stacey Abrams, the Democratic candidate for the governor of Georgia, has accused her Republican opponent and current Georgia Secretary of State Brian Kemp of abusing his power by leveling “cooked up” hacking allegations.
The Democratic Party of Georgia said it was blindsided Sunday when Kemp’s office announced it had “opened an investigation” into the party on Saturday evening after what it described – without evidence – as “a failed attempt to hack the state’s voter registration system.”
In a flurry of statements sent on Sunday, Rebecca DeHart, executive director of the Democratic Party of Georgia, said the “scurrilous claims are 100 percent false” and slammed the move as a “political stunt.” The party published two emails that purport to show a private individual who pointed out potential vulnerabilities in systems used by Georgia residents to print sample ballots and registration information that the individual suggested could allow a hacker to steal or manipulate registration information.
By Monday morning, Abrams took to the airwaves to push back.
“In fact, I think he cooked up the charge because he realizes once again he has left six million voters’ information vulnerable and this happened twice before,” Abrams told George Stephanopoulos on “Good Morning America” on Monday, likely in reference to a pair reported data breaches in Georgia in 2015 and 2017 that exposed the information on millions of residents. Stephanopoulos noted that Kemp had declined to appear on the broadcast.
In a statement on Sunday, Kemp’s office said they had officially requested the FBI to investigate the matter. The FBI declined to comment. The Department of Homeland Security said Sunday that the State of Georgia had notified the department about the issue but declined to comment further.
"The Democratic Party of Georgia will stop at nothing to regain relevance and power in our state," Ryan Mahoney, Communications Director for Kemp’s gubernatorial campaign, said Sunday. "In an act of desperation, the Democrats tried to expose vulnerabilities in Georgia's voter registration system. This was a 4th quarter Hail Mary pass that was intercepted in the end zone. Thanks to the systems and protocols established by Secretary of State Brian Kemp, no personal information was breached. These power-hungry radicals should be held accountable for their criminal behavior.”
David Cross, however, an attorney who has been involved in cybersecurity-related litigation against the Georgia Secretary of State’s office, said he was also alerted to the potential vulnerabilities by the same individual who contacted the Georgia Democratic Party. He told ABC News on Sunday that he also contacted the FBI – in an email exchange he shared with ABC News — and an outside counsel for Kemp on Saturday.
This is not the first time Kemp has raised allegations about attempts to infiltrate the secretary of state’s computer network. Just days after the 2016 presidential election, Kemp requested a federal investigation by the Department of Homeland Security, citing 10 suspected unauthorized attempts by DHS personnel to penetrate the state’s firewall.
A report from the Inspector General of DHS released in July 2017, concluded that allegations were unsubstantiated. The investigation determined that the activity flagged by Kemp was the “result of normal and automatic computer message exchanges,” and that there were no unauthorized intrusion attempts.
The race between Kemp and Abrams, who could become the nation’s first African-American woman to be elected governor, has been close and contentious. As of Monday afternoon, FiveThirtyEight’s gubernatorial forecast showed Abrams and Kemp locked in a tight contest, with Kemp holding on to a very small advantage.
Copyright © 2018, ABC Radio. All rights reserved.