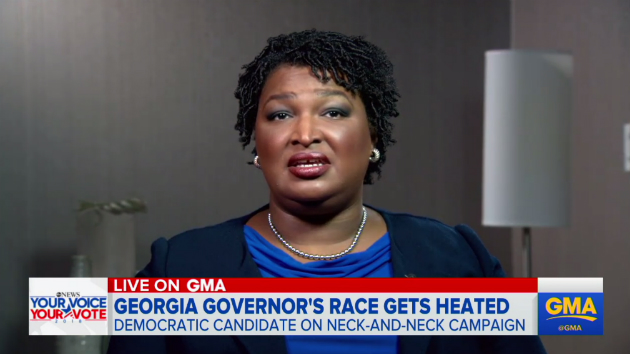 ABC News(ATLANTA) — In the wake of a racist robocall in Georgia by someone impersonating Oprah Winfrey, Democratic gubernatorial candidate Stacey Abrams said she is concerned state residents may feel like "their votes don't count."
Automated phone messages went out to an unknown number of Georgia homes on Friday featuring the voice of someone impersonating Winfrey, who campaigned with Abrams last week, according to ABC affiliate WSB in Atlanta..
"This is the magical negro, Oprah Winfrey, asking you to make my fellow negress, Stacey Abrams, the governor of Georgia," the call said in part. The message also included a slew of racist language including references to Aunt Jemima.
Both campaigns have denounced the calls, which were paid for by a group called Road to Power, WSB reported.
"Are you concerned these racist appeals are going to work?" ABC News Chief Anchor George Stephanopoulos asked Abrams on Good Morning America on Monday.
Abrams responded by referring to her Republican opponent Brian Kemp, Georgia's secretary of state, who has been under fire over alleged efforts to use his office to suppress votes.
"What I'm concerned about is that his overarching architecture of voter suppression, of ostracization, of demeaning and dehumanizing people, that that can cause people to think that their votes don't count, which is why we've been so aggressive about telling people the best antidote to his antics is to actually turn out and engage," Abrams said.
Good Morning America reached out to both candidates to join the show Monday, but Kemp declined.
In a statement, Kemp “unequivocally” condemned the group behind the robocalls and “their horrible actions,” which he called “absolutely disgusting.”
Road to Power has also been linked to a racist robocall in Florida concerning the African-American candidate for governor there, Andrew Gillum.
Voting rights have been a central issue in the Georgia governor's campaign over the past several months, and Kemp has resisted calls by some, including former President Jimmy Carter, to recuse himself from overseeing an election in which he is running.
Abrams, if elected in the tight race, would be the nation's first-ever female African- American governor.
She told Stephanopoulos that her winning would “send an incredibly strong message that the face of leadership is evolving in the United States.”
“That doesn't mean anyone is being pushed out. It simply means that more are being added to the conversation, and I hope I'm just the first of many. More people who stand up and understand that our voices and our votes matter and that we cannot only cast those ballots, we can stand for office,” Abrams said.
Stephanopoulos also asked Abrams about an announcement by Kemp’s secretary of state office that it opened an investigation of the state's Democratic Party over an alleged attempted hack of Georgia's voter registration system.
The state’s Democratic Party quickly dismissed Kemp’s announcement, which lacked details on the alleged hacking attempt, as a “political stunt.”
Abrams told Stephanopoulos on Monday, "I think he cooked up the charge."