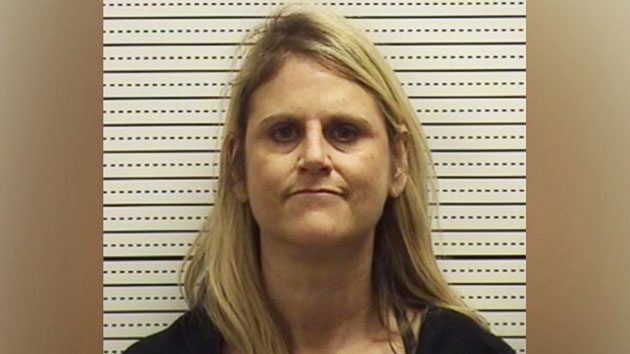 Charlotte-Mecklenburg Police Department(SUNSET BEACH, N.C.) — A woman who was caught on camera berating two African-American women in a parking lot lost her job and has turned herself in to police in Sunset Beach, North Carolina, according to authorities.
Susan Jane Westwood, 51, turned herself in on Saturday. She was served with an outstanding misdemeanor warrant for the misuse of the 911 system and four criminal summons for simple assault and communicating threats, according to the Charlotte-Mecklenburg Police Department. She was transferred to the Brunswick County Sheriff's Department and her bond was set at $500.
Westwood was caught on video on Oct. 19 berating sisters Leisa Meria Garris, 52, and Mary Michelle Garris, 49, while they were waiting for AAA to arrive in the parking lot for the Camden Fairview Apartments in Charlotte, North Carolina.
“I’m white and I’m hot. So what are you doing here?” Westwood said to the sisters. “I’m still going to make $125,000 Monday morning. Who are you, do you live here?”
“Do I need to bring out my concealed weapon too?” asked Westwood at one point during the encounter.
Westwood called 911 and falsely claimed that the women were trying to break into residences, according to the Charlotte-Mecklenburg Police Department.
"Folks that are trying to break into apartments, they’re actually people that I’ve never see here before but they are African-American," Westwood said on the 911 call. "They’re trying to cause a problem."
Along with recording Westwood's behavior, the Garris sisters also called 911 to report the harassment. Police arrived at the scene, but were unable to locate Westwood, and issued a warrant for her arrest on Oct. 30.
“She assaulted us both. So there should be charges,” said Mary Garris when she spoke with ABC News on Saturday. “We want to bring justice. We want to bring awareness to the community. People are being judged for the color of their skin.”
"It’s been an eye-opener,” continued Garris. "This happened only because we were standing out and waiting for AAA. This is alarming and upsetting."
Prior to her termination, Susan Westwood was employed at Charter Communications.
“The incident recorded in Charlotte is a blatant violation of Charter’s code of conduct and clearly disregards the company’s commitment to inclusion and respectful behavior," said Scott Pryzwanky, a spokesperson for the company, in a statement. "As such, Ms. Westwood’s employment with the company has been terminated, effective immediately.”
It was not immediately clear if Westwood had retained or was assigned an attorney.
This is the latest in a series of high-profile incidents in which a white person has called the police to report black people taking part in everyday activities.
Last month, a white woman in Brooklyn called the police after accusing a 9-year-old African-American boy of groping her. Security footage proved this was false.
Another white woman in St. Louis was fired from her job after a video went viral in which she blocked a black man from entering his own apartment building.
Copyright © 2018, ABC Radio. All rights reserved.