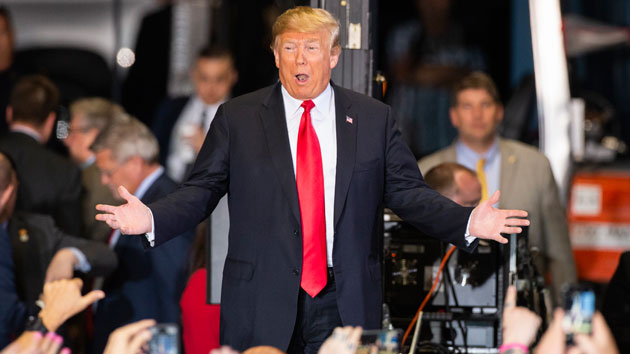 Mark Wallheiser/Getty Images(PENSACOLA, Fla.) — Closing in on next Tuesday’s midterm elections, President Donald Trump delivered his final stump speech in the Sunshine State Saturday night, urging Floridians to “vote Republican” in order to “keep America great.”
“A vote for any Democrat this November is to really vote to put extreme far left politicians in charge of Congress, and to destroy your jobs, slash your incomes, undermine your safety, and put illegal aliens before American citizens,” Trump told the Pensacola crowd.
“A vote for Republicans is a vote to protect your families, to keep the economic boom going full speed ahead, and it is going to be better that ever before.”
Standing before thousands of supporters clad in red Make America Great Again hats and packed into an airplane hangar, Trump campaigned alongside Vice President Mike Pence on behalf of Florida Republicans, topped by gubernatorial candidate Ron DeSantis and the GOP’s nominee for U.S. Senate, Rick Scott.
As he has at previous campaign trail rallies, Trump zeroed in on a so-called caravan of immigrants from Central American making their way through Mexico toward the U.S. border.
“When you look at that caravan coming up –- that’s not what we want. That’s not for us, folks,” Trump said. “They have to come in legally. They have to come in absolutely through a process and they have to come in through merit so they can help all the companies moving back to Florida and the United States.”
Trump did not discuss his latest proposal to end birthright citizenship, but he emphasized his desire to “have a great strong powerful border.”
“If you want to protect criminal aliens, you should vote Democrat,” Trump suggested. “If you want to protect law-abiding Americans, you should vote Republican.”
While Trump has made immigration a central theme of his stump speech throughout the campaign cycle, the president on Saturday recounted the actions of his administration through the first two years of his presidency –- capped, he said, by the “hottest economy anywhere on Earth.”
“We are over-performing,” Trump said, ticking through a slate of record-breaking economic indicators. “What we said [on the campaign trail in 2016] was great, but what we’re doing is far greater.”
Scott, the current governor of Florida, is facing incumbent Democratic Sen. Bill Nelson while DeSantis, a former U.S. representative, is squaring off against Tallahassee Mayor Andrew Gillum.
“The choice is simple: A Republican Congress means more jobs and less crime,” Trump declared. “A Democrat Congress means more crime and less jobs. It’s pretty simple.”
After Trump’s Saturday evening rally, Florida Democratic Party Chair Terrie Rizzo released a statement assailing the president for his remarks.
"A day after Democrats held a rally with President Barack Obama laying out their vision for a better future for Florida, Donald Trump once again led Rick Scott and Ron DeSantis' campaign of lies and fear,” Rizzo’s statement said, in part. “Donald Trump, Ron DeSantis and Rick Scott have launched baseless attacks on Mayor Gillum and Senator Nelson to distract from the fact that DeSantis and Scott will rip healthcare away from millions of Floridians.”
For his part, former President Barack Obama this week poked fun at Trump’s reaction to the caravan. He also suggested that sending troops to the southern border was unnecessary and not the best use of America’s military.
"The biggest threat to America?” Obama said at a Georgia Democratic rally on Friday. “The biggest threat, is some impoverished refugees a thousand miles away?"
“Now they're sending our brave troops. Who by the way, by law, cannot enforce laws on our natural soil.
“The men and women of our military deserve better than that," he concluded.
Trump will campaign in Macon, Georgia, and Chattanooga, Tennessee, on Sunday before a three-state swing on Monday through Cleveland; Fort Wayne, Indiana; and Cape Girardeau, Missouri.
Copyright © 2018, ABC Radio. All rights reserved.