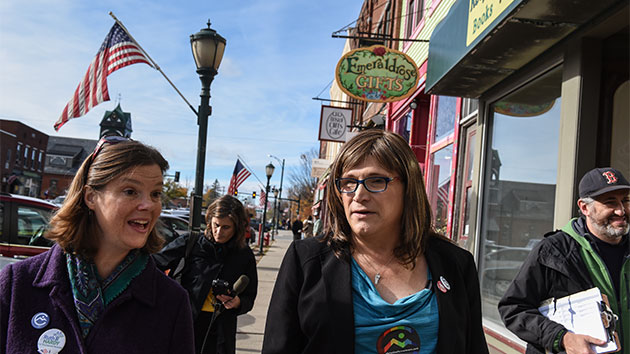 Stephanie Keith/Getty Images(NEW YORK) — Vermont is poised to make history for the LGBTQ community if voters in the Green Mountain State oust their current governor in favor of first-time candidate Christine Hallquist.

The Democrat running in Vermont’s gubernatorial election, will be the first transgender governor in the nation if elected on Tuesday.

After securing her party’s nomination in August, Hallquist is up against Republican incumbent Gov. Phil Scott, who is running for a second term in the historically blue state. Scott is facing a tough challenge since his approval ratings with his GOP base have tumbled following recent efforts to tighten gun control in Vermont.

Despite being a liberal stronghold, particularly in presidential elections, Vermont residents are staunch supporters of gun rights — with the state scoring an "F" according to the Giffords Law Center.

Advancing a progressive platform focused on economic and social justice, including a $15 minimum wage, environmentally sustainable rural development and expanding access to internet services, the Democratic hopeful edged out challengers in a crowded primary.

"I am so proud to be the face of the Democrats tonight," Hallquist said during her primary victory party.

Hallquist joins three other openly LGBTQ candidates for governor this year — a historically high number — including Lupe Valdez of Texas, Kate Brown of Oregon and Jared Polis of Colorado, all Democrats.

Before making a bid for governor, Hallquist was the chief executive of the Vermont Electric Cooperative for 12 years. She transitioned from male to female in 2015, and became the first business leader in the country to transition while in office.

ABC News partner FiveThirtyEight lists the race as likely electing the Republican candidate and forecasts a 11.6 point lead for Scott, as of Nov. 4.

With omicron in Colorado, ‘last thing that we want is another wave,’ governor says
Gov. Wolf vetoes bill for concealed carry with permit
Democrat Stacey Abrams announces second try for Georgia governor
Ryan Reynolds serenaded by Barenaked Ladies’ Steven Page for getting Canada’s Governor General honor
Matthew McConaughey announces he’s not running for Texas governor
Poll shows Matthew McConaughey would do more than all right, all right, all right if he ran for Texas governor