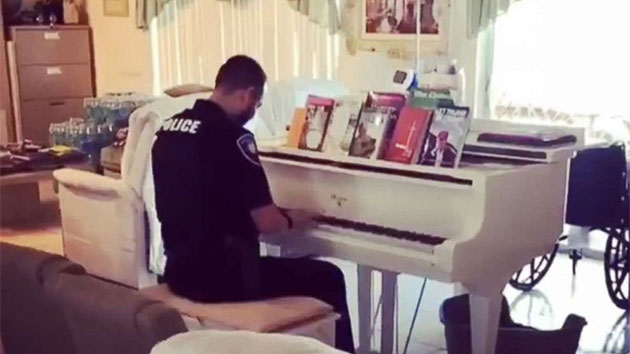 Pembroke Pines Police Department(MIAMI) — A South Florida police officer recently displayed his musical prowess while responding to a 911 call of an elderly man who had suffered from a bad fall.

The Pembroke Pines Police officer of six years, who requested to be identified as only Officer Hernandez, told ABC News he sat down at the piano for the man's overwhelmed daughter.

Hernandez, 30, was participating in a community patrol in Spring Valley last month when he heard a 911 call come in over the radio. Once he got to the home, he discovered that not only had the man in his 90s fallen, but his health was "doing really bad" in general, he said.

"I guess that's why I did the whole piano thing," Hernandez said, adding that he could tell the man's daughter, who is in her 60s, was "struggling with her elderly parents."

Hernandez then pointed to the white baby grand piano in the family's home, asking if they would mind if he played.

"And we started jamming out" to songs like Survivor's "Eye of the Tiger," Journey's "Don't Stop Believin'" as well as some classical and jazz music for about 10 minutes, Hernandez said. A firefighter on the scene recorded a video as others in the room sang along.

And it turns out, Hernandez's method to calm the situation worked. Shortly after he started playing, the couple's daughter, who the piano belongs to, then stood to Hernandez's right and accompanied him with some duet work, he said.

Hernandez, who is the lead pianist at his church, began playing around the age of 6, he said. The Miami Lakes resident is self-taught and also plays the guitar and drums.

Depending on the type of call, he'll often ask permission to play when spotting musical instruments around a home, he said.

"It usually makes people feel better," Hernandez said. "They see a police officer in uniform perform something cool, they get all excited."

At home, Hernandez plays a 7-foot black grand Kimball piano, a present he bought himself after working 72 hours straight during Hurricane Irma in 2017.

"As soon as the whole relief effort ended, I went ahead and purchased that piano," he said.

While Hernandez has not paid much attention to the praise he's getting on social media after the police department posted the video to its Facebook page, he said he's happy the video is promoting law enforcement in a positive light.

"It definitely helps that people have a better view of our purpose," he said. "…We're human. We have talents. We have family. We're just like everyone else, but doing a job that no one likes to do."